Back when my youngest was a toddler we discovered that she would eat ANYTHING – and I mean anything we couldn’t do activities with her with shaving foam or normal paints. In fact, it was her that inspired me to dig out the notes from when I taught to find a recipe for taste safe baby finger paints and although she tried to eat it the taste wasn’t good.

At the same time, one of my friends told me she found a recipe for edible playdough that I had to try I never got around to it at the time because she did eventually grow out of it.

But now I occasionally look after a young toddler and wanted to create some totally safe edible play dough for him to use so I found the piece of paper in my craft notes and compared it to a recipe for taste safe marshmallow play dough from Steam Powered Family that I had pinned ages ago and decided to give it a go.

Looking for more playdough recipes – check out these Easy Playdough Recipes to make with and for kids.

Tips for getting this Edible Playdough to Work!

So during the process, I learnt a few useful tips and thought it best to share them with you so that you don’t make the same mistakes as I do!

Microwave the Marshmallows in small phases!

Much like our microwave salt dough recipe you can’t go all out and melt your marshmallows in the microwave all in one go! You just end up with an exploding mass of marshmallows – yeah I didn’t take the advice in the Steam Powered Family post instead I thought I knew better – do it in 10 seconds at a time. Remove the marshmallows and STIR then put back in and go for another 10 seconds.

Don’t put away your powdered sugar before you are finished!

You will need it to dust the surface, as well as to keep the dough from sticking to your hands as you knead it. It took quite a while to knead it and mix it as the melted marshmallow doesn’t really want to go together with the icing sugar at first but keep at it and turn it out whilst still sticky.

Fold in your icing sugar!

Once you have turned out the sticky mass onto my pastry board and then dumped some of the icing sugar in the middle and folded it into the dough and kept repeating this kneading it in my hands until it formed a smooth dough.

This is not a lasting playdoh recipe – it’s going to go off fairly quickly but if you like us have an old packet of marshmallows sitting in the cupboard and they are about to go off it’s perfect. Or have a toddler that puts everything in the mouth to eat then this is perfect.

How to get it really colourful!

If you wish to add colour we recommend food colouring paste rather than liquid as you only need a small amount of the paste to add if you do use food colouring liquid then keep your icing sugar on hand to add to the mix as it will become sticky again. 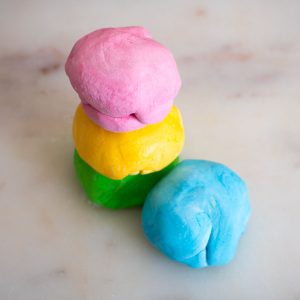 Keyword Play Dough
Tried this recipe?Let us know how it was!

A warm welcome to Rainy Day Mum, your hub of ideas and inspiration for kids’ activities, learning, crafts, and tasty treats they can cook themselves. From tot to teen whatever the weather there’s always something fun to do.
1411 shares
1.4K shares