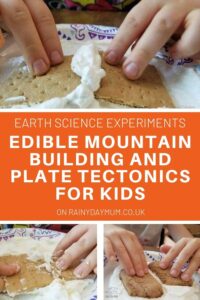 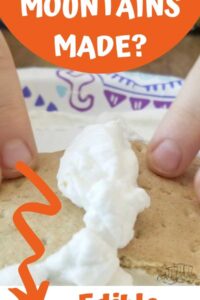 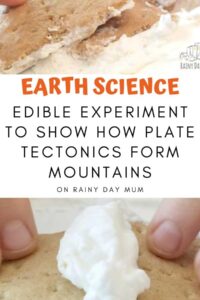 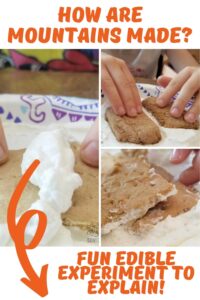 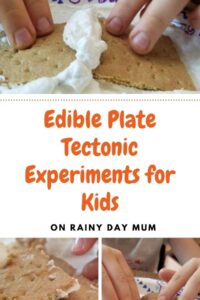 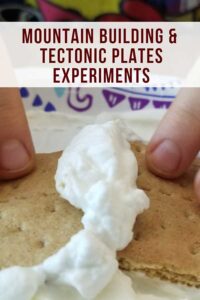 We think that science is fun!

But edible science is tasty fun and educational and we love exploring Geology through simple experiments including our edible rock cycle (which you can find at the end with more earth science experiments for kids).

These simple science experiments for kids to explore how mountains are formed are tasty fun and you’ll learn together.

So here you go some edible mountain building and tectonic plate experiments for kids.

Hi! I am so happy to be here to share our edible (and delicious!) hands-on mountain building and plate tectonic experiments with y’all today!

I have always wanted to see lava flowing out of volcanoes! I think I’ve even convinced my kids that it would be a cool thing to see, so when I told them that we were doing some experiments to model how the Earth behaves (and that it would involve whipped cream) they were totally ready to play!

My name is Carla Mae Jansen, and I recently finished writing A Dinosaur Made Me Sneeze, a picture book about the rock cycle (more on that below!).

Anyway, since I’ve been working on this geology book we have been doing a ton of geology activities as part of our school time.

These experiments model how pressure and motion create cracks and fissures that allow magma to escape through the Earth’s crust…and it’s all completely edible!

How to Make your Edible Mountains Experiment

Put a large scoop of whipped cream and two graham crackers on each plate for each experiment.

To introduce the lesson we always start by talking about how the Earth’s crust is made up of plates that fit together like a puzzle, and under the crust is the mantle (which is mostly solid rock that is so hot that it moves and flows).

It also gives an opportunity to discuss (and joke about) the fact that all models have weaknesses — and one obvious one in the set-up was the white-colored mantle. Since Earth’s mantle is made of burning hot rocks, it is probably brown, black, and red.

I begin the lesson by telling the kids that there are 3 main types of ways that the tectonic plates behave at their boundaries.

We’ll quickly model each type, and then they are free to experiment with their plates and mantles in any way they’d like.

Looking for great Geography Books for kids then check out our Review of the Horrible Geography Collection.

These occur where two plates going opposite directions rub against each other.

This does not usually build mountains, but it makes a lot of earthquakes as the plates slide against each other.

The San Andreas fault in California is an example of a transform boundary. The kids easily crumbled the edges of their “tectonic plates” as they carefully rubbed the crackers against each other.

You can also see in this picture that one of my kids has a different kind of cracker than the others–this is because the graham crackers have too much sugar for her. But these biscuits worked just as well for all the models we did!

At divergent boundaries, the plates are moving apart slowly, creating a chasm where the magma from deep in the Earth rises up to cool and form new crust.

If your kids gently press their cracker “plates” down and apart, they will see “magma” rising up in between them!

(Side note: In real life, the Earth’s mantle and magma are NOT the same thing! The mantle is mostly solid rock, but magma is the liquid rock that is often stored in pockets throughout the mantle and crust. This is another case of all models having imperfections.)

Divergent plate boundaries usually occur under the ocean in places like the Mid-Atlantic Ridge, but can also be seen in a few places above the ground, like in Iceland!

Convergent plate boundaries are places where two plates are moving toward each other, literally crashing into each other.

This is the best mountain-building boundary on Earth!

Before the kids model this, I encourage them to dip one side of each cracker (the sides that will be colliding) into a bowl of water. This helps mimic the changes that happen to the Earth’s crust under the intense pressure of plates colliding!

If your kids are gentle with their cracker “plates,” they will see the cracker fold and create mountains!

Examples of this include the Himalayas and the Appalachian Mountains.

If your kids are less gentle, they will quickly see a subduction zone form.

There are two basic types of crust: continental and oceanic.

You can easily see with the crackers how a subduction zone creates two things: a tall mountain AND a low valley.

Here is a cartoon diagram of the subduction zone that formed the rocky mountains.

You can also see that as the oceanic crust slides deeper, it begins to melt. Our model doesn’t show this well, but often that melted rock will seep up to the surface and form volcanoes in the growing mountain range.

This is currently happening in the Cascade Mountains and the Andes! The deepest valley in the world, the Mariana Trench, was formed this way!

At this point, I like to let the kids experiment with their crackers and whipped cream however they want!

They usually like to create as many convergent boundaries and subduction zones as they can!

When they finish, they like to taste their tectonic plates too.

A really fun follow-up activity if you live close to any mountains or faults is to figure out what kind of plate boundary you are at, and then visit it and look for evidence of that plate boundary.

When I lived by the Rocky Mountains, we could easily see both fault lines and cliffs with “folded” rock!

A Dinosaur Made me Sneeze Book Connection

My new picture book, A Dinosaur Made Me Sneeze, also goes perfectly with this!

This delightful rhyming story introduces rock cycle science (complete with vocabulary like “sedimentary,” “igneous,” “metamorphic,” and more!) with fantastic characters and a hilarious story! It showcases the changes that the Earth and rocks on the Earth make as years go by. You can learn more about it, see some of the illustrations, and more HERE!

I’m still hoping to see some active volcanoes someday but, in the meantime, I might have to let whipped cream represent both the Earth’s mantle and magma (just don’t get them confused in real life–they are two separate things)!

I hope you have a “rock-ing” time making (and eating!) your mountain building tectonic plate boundaries!

Thanks again for letting me join you, and happy educating! 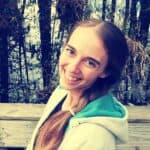 Carla Mae Jansen is an educator, author, and mom who lives in Virginia, USA.

She loves going rock-hunting, eating chocolate, and exploring new places with her family.

She has a master’s degree in teaching science, and is always looking for something new to learn!

You can follow along with her publishing adventures at Turtle Trails Publishing.

A warm welcome to Rainy Day Mum, your hub of ideas and inspiration for kids’ activities, learning, crafts, and tasty treats they can cook themselves. From tot to teen whatever the weather there’s always something fun to do.
440 shares
440 shares