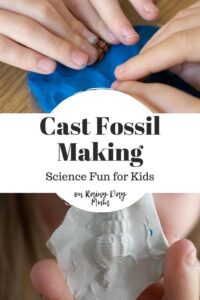 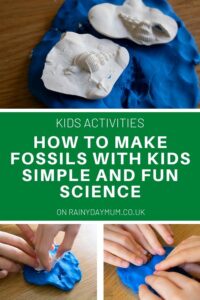 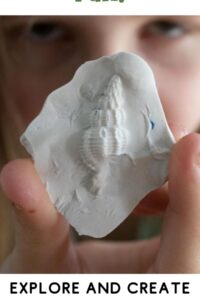 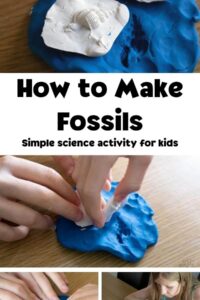 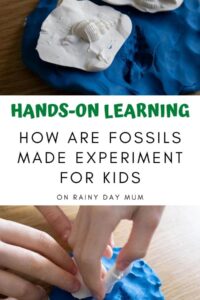 We love learning about the animals that once roamed our planet and fossils is one of the best ways to learn this. In the past we have explored how mould fossils and trace fossils are made, but that leaves just two other sorts of fossils, cast and true form fossils. This simple activity is great for explaining how cast fossils are made and for your child to create their own.

There are 4 forms of fossils found.

Each of them shows us a glimpse of the past but in different forms.

You can find ideas to recreate the fossil process with these fossil activities for kids.

Trace fossils are one that I consider the most interesting. Unlike the skeleton fossils found with mould, cast and true form, trace fossils show how the animals lived.

They can be footprints, burrows, dung, tooth marks and more. We experimented with making trace fossils using our own mud to show how they were formed. See our trace fossil experiment here.

Mould fossils (mold fossils) are produced when an imprint of an animal is left in the substrate and the fossil formed is hollow as the animal decays.

Common mould fossils show more about the features of the creatures than the skeleton produced. Skin, feathers, teeth and leaves are common to see.

Mould fossils are easy to make, you can follow our Salt Dough Fossil Tutorial on how to make them using your toy dinosaurs.

True form fossils unlike trace, mould and cast are formed from the actual body or parts of the animal or plant.

The process to create a true form fossil is called petrification and is the replacement of the parts of the creature by minerals.

Insects and other parts of animals in amber are another example of true form fossils.

A cast fossil is where an animal dies and over time it’s body parts decay leaving a void, that void is then filled with minerals and over time the minerals from rocks which leave a cast of the creature that died. They are generally found where once there was quiet water that sediment and silt could build up in.

Cast fossils can be found of lots of animals and plants and shells like Ammonites and trilobites are very common examples that can be found.

How to make Cast Fossils

In this simple experiment we are going to mimic the process that create cast fossils to show how they would have formed but in a few minutes instead of millions of years.

To make the fossils you will need:

Plasticine or other modelling clay that will not dry out

Small cup or beaker to mix your plaster in

Method for Creating your Fossils

How does this mimic the cast fossil process

In a cast fossil the dead creature lays to rest on silt or sand – their weight creates an impression in the substrate exactly the same way that our shell in the experiment when pressed into the Plasticine creates a mould.

As the animal decays over time, it disappears or parts are washed away gently leaving the impression in the silt or sand. This is the removal of the shell.

Debris like silt, mud and sand fall into the mould over time – our pouring of the liquid Plaster of Paris.

Millions of years pass the sediments in the silt and sand form together to create shale or sandstone where the cast and mould fossils can be seen. This is shown by the hardening of the plaster.

Instead of plasticine air drying clay could be used to create a true cast and mould fossil, however, you will find it more difficult to split the two and it will take longer for the experiment waiting 24+ hours instead of minutes to conduct it from start to finish.

Resources for Learning about Fossils

There are lots of resources for learning about fossils, here’s a few of our favourites below.

First off some of our favourite books about fossils – you can find a more comprehensive selection in our Best Earth Science, Rock and Fossils Books for Kids.

Mary Anning was one of the first people to discover fossils and identify them in the cliffs on the South coast of the UK. The book Dinosaur Lady: The Daring Discoveries of Mary Anning the First Palaeontologist by Linda Skeers is great to explore about the start of palaeontology and famous scientists.

Another fossil book we love that is aimed at explaining the processes as well as looking at the evolution of creatures explored through geological time and fossil evidence is Fossils for Kids: A Junior Scientists Guide to Dinosaur Bones, Ancient Animals, and Prehistoric Life on Earth by Ashley Hall. 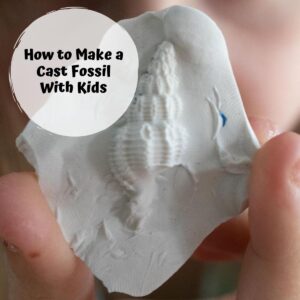 How to Make a Cast Fossil With Kids

Cerys Parker
A fun and simple experiment for kids to show how a cast fossils is made.
No ratings yet
Print Instructions Pin How To
Cook Time 5 mins
Hardening of Plaster 20 mins
Total Time 25 mins

Keyword Dinosaur Activities, Dinosaur Crafts, Fossils, Geography, Science Activity, Science Experiment
Have you Made This?Let us know how it went!

Want to dig up some real fossils the National Geographic Fossil Dig Kit is the best that we have used. It does contain real fossils, but they are small and could easily be mistaken for just rocks if you don’t take care. With all the fossil kits you need to be aware that LOTS of dust is created we learnt the hard way the first time and since then have only carried out the digs outside.

If you want to start off your future paleontologist with their own set of fossils then this Fossil Set contains 20 different prehistoric fossils of plants and animals. Included is information about the fossils so your kids can learn a little more.

Dinosaurs lived over 3 periods of time, so why not show why certain dinosaurs often pictured together would never have occurred by creating a timeline of dinosaurs and other reptiles during the Triassic, Jurassic, and Cretaceous periods.

Put dinosaurs and humans in the context of the history of the planet earth by creating a geological timeline with your kids.

A warm welcome to Rainy Day Mum, your hub of ideas and inspiration for kids’ activities, learning, crafts, and tasty treats they can cook themselves. From tot to teen whatever the weather there’s always something fun to do.
455 shares
455 shares