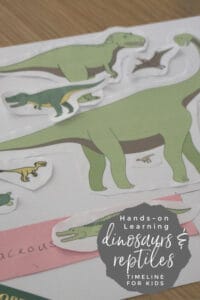 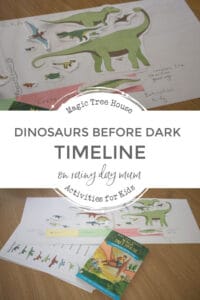 Dinosaurs are one of the things that have long fascinated both my kids and I. We have loved watching programmes about them, reading about them and creating dinosaur activities inspired by them. As they are older now though I really want to take their understanding and learning to the next level so we are looking at the dinosaurs from the 3 different periods and creating a timeline to show why the Megalosaurs and the Tyrannosaurs wouldn’t ever have hunted together. So here we go a DIY Dinosaur Timeline Activity for school kids that is perfect for pairing with reading Dinosaurs Before Dark.

The first book in the Magic Tree House Series is Dinosaurs Before Dark in this early chapter book for kids learning to read you are introduced to the main characters for the series, Jack who is 8 and a half and his younger sister Annie who is just 7 years old, as well as the Magic Tree House. Before you head off in a prehistoric adventure with the kids.

Arriving in the Late Cretaceous Period they encounter some of the dinosaurs from the era including the terrifying Tyrannosaurus Rex and through the story, you and your child will get to learn a little bit about these dinosaurs.

Extending on the knowledge gained from the book we have created this DIY Dinosaur Timeline for your children and you to research, create and then use whilst learning a little more about dinosaurs and also a bit more about the history of the earth.

Don’t forget that you need to download the dinosaur research sheets and images to cut out and use.

Understanding the History of the Earth

Before you start to work on creating a timeline with your children it’s important that they understand that the history of the earth is divided up.

From Eons to eras, to periods, to epochs and ages earth has been changing over the last 4.54 billion years.

Within just one Eon, the Phanerozoic, life as we know it evolved and it is within this Eon, that the era that makes up the rise of the reptiles “the dinosaurs” exits.

The Mesozoic Era, the middle era. This Era is subdivided into the periods Triassic, Jurassic and Cretaceous and is where the timeline for the dinosaurs will focus.

If you would like to put it into context for your children in terms of the history of the earth you can draw a timeline and show where life as we know it and the dinosaurs fit.

See our example below and follow the instructions on our creating a Timeline of the History of the Earth if you want. 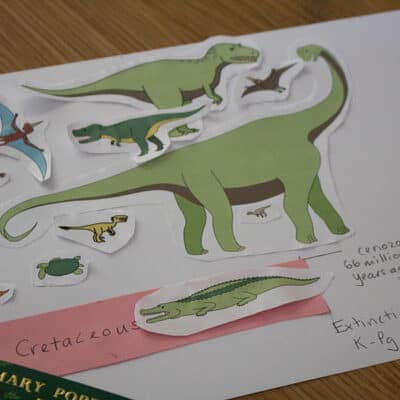 Researching the Dinosaurs and Creating the Timeline

We recommend either finding a good none-fiction dinosaur book or using the internet to conduct the research into the different dinosaurs to show which era they belong in. Although we have included dinosaurs we have also included other noteable reptiles in the research sheets that it would be useful to put in the timeline as well.
Keyword Dinosaur Activities, Learning, Timeline
Have you Made This?Let us know how it went!

More Activities for Learning About Dinosaurs

Dinosaurs are so fascinating and we have created some fun activities in the past about dinosaurs check them out below these would be ideal to do alongside this timeline as part of a Dinosaur Unit Study Inspired by Dinosaurs Before Dark by Mary Pope Osborne.

Using toy dinosaurs – why not explore what the difference in their teeth shows about how they eat with this sorting and classification activity.

Explore how some of the dinosaur predators used their defences with this fun Dinosaur Science Experiment.

We know about dinosaurs because of the signs that they have left in the Geological Timeline. Their fossil evidence. You can explore these with your kids using our 2 fun fossil activities.

The first is looking at trace fossils – like the dinosaur footprints. Make up your own “mud” and then use the mud to make trace fossils with kids.

Trace fossils are just one sort of evidence the other is more complete skeletons or the molds of the skeleton. We have our own version to make with Salt Dough Mold Fossils.

Resources for Learning More About the Mesozoic Era and Dinosaurs

I hope we’ve explained enough above to give you the knowledge to create your own timeline however if you would like more information about The Mesozoic Era or “The Age of Reptiles” we recommend watching the YouTube video below with your child.

We’ve also put together a book list of dinosaur-themed fiction books for 6 – 9-year-olds that are perfect to read alongside Dinosaurs Before Dark if you want to explore this topic more with your kids.

Are you reading The Magic Tree House Series with your child?

Would you like to extend the reading with more book based activities like this Dinosaur Timeline Activity that combine learning and creativity?

Then why not join our Magic Tree House Series Newsletter, every other week at least 1 new idea for the next book in the series will arrive in your inbox to share with your child helping explore the topics and themes through History, Geography, Art, Science and more.

Just fill in the form below and we look forward to welcoming you as well as providing this and additional ideas for the Dinosaurs Before Dark Book in your first newsletter.

A warm welcome to Rainy Day Mum, your hub of ideas and inspiration for kids’ activities, learning, crafts, and tasty treats they can cook themselves. From tot to teen whatever the weather there’s always something fun to do.
255 shares
255 shares