One of J’s favourite songs to sing is Five Little Speckled Frogs so inspired by these cute little egg carton bunnies that Glittering Muffins made for Easter I got cutting out some egg carton sections to make Five little Speckled Frog Craft sitting on a speckled log to bring the song to life for us at play-times. 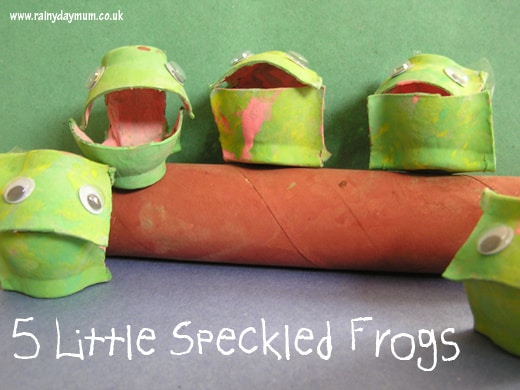 Make your own Five Little Speckled Frog Puppets – perfect to use whilst you sing along.

What you need to make 5 little Speckled Frog Craft

As J is only 32 months I cut out the egg carton into 10 egg cups to make the five frogs. I found them quite tricky to cut I don’t know whether it’s the sort of egg cartons that we have but I think even older children may have a problem with cutting them. Once cut out I set up our painting station with some brown, green and yellow paint which J then used to paint the outside of the frogs.

We Painted all of the outsides of the egg cartons first and then put them to dry – as when I showed J how they would fit together he declared that we had to paint their mouths as well. There was much amusement as we tried to work out what colour a frogs mouth was and decided that we would go with what colour was inside Mummy’s mouth – so I had to open my mouth wide to work out the colour (we’ve visited the dentist recently and this is now one of his things).

Whilst the cartons dried we painted a speckled log brown and yellow for the frogs to sit on and then returned to painting inside (and some of the outside) of the speckled frogs pink for their mouths.

Once all of the frogs were dry we joined them together with some sticky tape as J wanted to play with them now (I’ve since gone back and glued them using white glue so they are more sturdy) and added some goggly eyes to them. I then set up a pond with a sheet of blue paper and a green background and we put the log and the frogs on the log (if you squish the log the frogs will stand on the log).

A warm welcome to Rainy Day Mum, your hub of ideas and inspiration for kids’ activities, learning, crafts, and tasty treats they can cook themselves. From tot to teen whatever the weather there’s always something fun to do.
1986 shares
2.0K shares