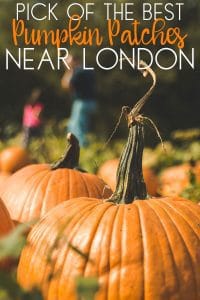 It’s now officially autumn, which means it’s time look for the perfect pumpkin for decorating. There is no doubt that you can buy a great pumpkin from the store, but after going out for the last few years to our local pick your own farm and choosing the pumpkins for the family there is nothing like it. Around London, there are some fun places to not only find a pumpkin! But also to entertain the family check out our recommendations for the best Pumpkin Patches around London 2019 for you and your kids to visit this year.

Don’t forget to save your pumpkin seeds as you can easily grow them and growing and picking your own from your garden is even better than heading to a pumpkin patch believe me!

PUMPKIN PATCHES TO PICK YOUR OWN AROUND LONDON

We’ve selected our favourite pumpkin patches that you can get to easily from London. Check them out as we’ve updated the list for 2019 to include some new ones.

One of a number of pumpkin picking patches that have popped up around the country The Pumpkin Picking Patch at Wimbledon can be found on Wimbledon Park opposite Centre Court.

It opens for on the weekend of 13th and 14th October from 9 am- 4 pm and then from the 19th October to the 28th October at the same time.

As well as picking your own pumpkin there are other activities on during the opening times. Check out the details on the website.

Located about 47 minutes southwest of London, Crockford Bridge Farm grows 20 different types of crops. But, since we’re in the pumpkin mood, the farm offers a variety of them during October. Thousands of pumpkins will be available to be picked from tables on the farm.

On certain weekends in October, you can pick the pumpkins direct from the field this year according to the information on their website. However, during the Pumpkin Festival (October Half Term) this won’t be possible.

The Pumpkin Festival is an annual event at Crockford Bridge Farm there is a woodland theatre and more and it really is worth visiting during the lead up to Halloween.

If you do visit during the Pumpkin Festival but don’t wish to pay then you can buy from the large variety of pumpkins that they have available in the farm shop.

Growing up on a farm before going to university, Guy wasn’t used to paying for fresh vegetables. Shocked at the prices at local farmers markets, he decided to raise his own vegetables. A classmate’s father liked the produce and started to sell it at his farm shop. After college, Guy acquired land and started raising vegetables. It eventually became Foxes Farm Produce. Growing pumpkins and Christmas trees became its focus.

Today, visitors can play in a corn maze, too. There is an extra fee for this of £3 but my kids had a lot of fun in it.

Foxes Farm invites visitors to pick their own pumpkins from the farm in Basildon, about 58 minutes from London.

The pumpkin patch is open weekends Sept. 28 through to October 13th and then from October 19th all the way through to the 31st October. It is free to enter but you pay for the pumpkins that you pick.

They recommend wearing Wellies due to muddy fields. The mud adds to the family fun (but, you may want to bring some clean clothes for the children).

Bring lots of big bags, as the pumpkins may be large and will definitely be dirty. If you’re in the mood for a meal and drinks during your visit, food stalls are available. Also, you will want to park your car on the hard surface near the farm.

The farm has a second location in Colchester, about 90 minutes northeast of the city. Check out our guide to Pumpkin Patches in East Anglia as that is closer to the border of Suffolk.

Located about 50 minutes southeast of London off the M25 near the Dartford Crossing, Stanhill Farm offers a pumpkin patch near its farm shop where you can pick your own.

Visitors can take a wheelbarrow and fork from the farm shop to the pumpkin patch to help harvest pumpkins. The patch is home to a variety of pumpkins, which are excellent for decorating and carving for the holiday season. Don’t forget your camera as it’s the perfect opportunity to take some great autumn pictures with the kids.

Head to Priory Farm in Surrey near RedHill for their Haunted Halloween.

Entry to the pumpkin patch on a tractor ride is free, you just pay for what you pick.

From Monday 7th October to Monday 4th November from 9 am to 4:30 pm there is also a Spoooooky Trail through the woods on one of their discovery trails.

Now head over to our Halloween Potion Popcorn to get the full recipe and instructions to make them with the kids.

Located near Milford Surry Secretts has a Pumpkin week from the 23rd to the 28th October.

During this week you can take the tractor ride out to the field and pick your own pumpkin.

Then return enjoy some of the family activities plus taste the delicious meals prepared on-site and if you find one you like, go make them at home as they have a set of their pumpkin recipes on the website.

Details are yet to be announced fully but Four Winds Warm will have a Pumpkin Week from 23rd to 27th October.

With sheep and this year’s lambs, you will be able to pick your pumpkin for carving but also see some of the cute animals too.

Willows Activity Farm in St. Albans provides a variety of events for children. From carousels, outdoor games and covered play areas to tractor rides. Families can spend a full day at the children’s farm, about 50 minutes north of London.

Peter Rabbit’s Adventure Playground offers youngsters an opportunity to meet Peter and his friends. The attraction includes Mr. Toad’s Lair, with secret entrances and hidden rooms, all for kids to enjoy.

The Pumpkin Festival in October encourages children to pick their own pumpkin from a bountiful harvest. This year’s dates are from 19th October to 3rd November and the prices can be found on their website.

Pumpkin Jim’s, Near Saffron Walden ~ Pick Your Pumpkin and try some waffles

Besides picking their own pumpkin from the pumpkin patch, children can also play in the undercover area for a small fee. They can also participate in mini tractor races. While at Pumpkin Jim’s, you can participate in classes about decorating pumpkins or canning.

Located in Ickleton near Cambridge, the pumpkin patch is about a 90-minute drive northeast of London.

Pumpkin Jim’s is a cash-only pumpkin patch and has food and drink available including this year delicious waffles to try.

At Tulley’s Pumpkin Farm, it’s not just about the picking of the pumpkins there is plenty to do as well.

This is open the weekend of 12/13th October then from 19th October to the 31st October.

Head to Tulley’s Spookfest as well whilst you are there aimed at 6 – 13 year olds. With spooky hayrides, haunted houses and more it’s fun for your school kids to do once they’ve picked their pumpkins.

Tulley’s Spookfest is open 19/20th October and then from 26th October to November 2nd. Prices for the event can be found on their website when you click Book Ticket.

So, as your family plans a day at a pumpkin patch around London, you will want to bring shoes, a possible change of clothes and plenty of bags to carry home your prized pumpkins.

Enjoy the day trip and have fun at the pumpkin patch this autumn.

More Ideas for London with Kids A week of preschool fun for Halloween.
Planned for you with step-by-step guides for all activities.