This week for storybook summer we're going small and looking at the microworlds of minibeasts and bugs. Today Danya is joining us sharing a fun craft for the fabulous The Bad Tempered Ladybird by Eric Carle (The Grouchy Ladybug in the US).  So I hand over Rainy Day Mum to Danya to share this fun crafts for kids. 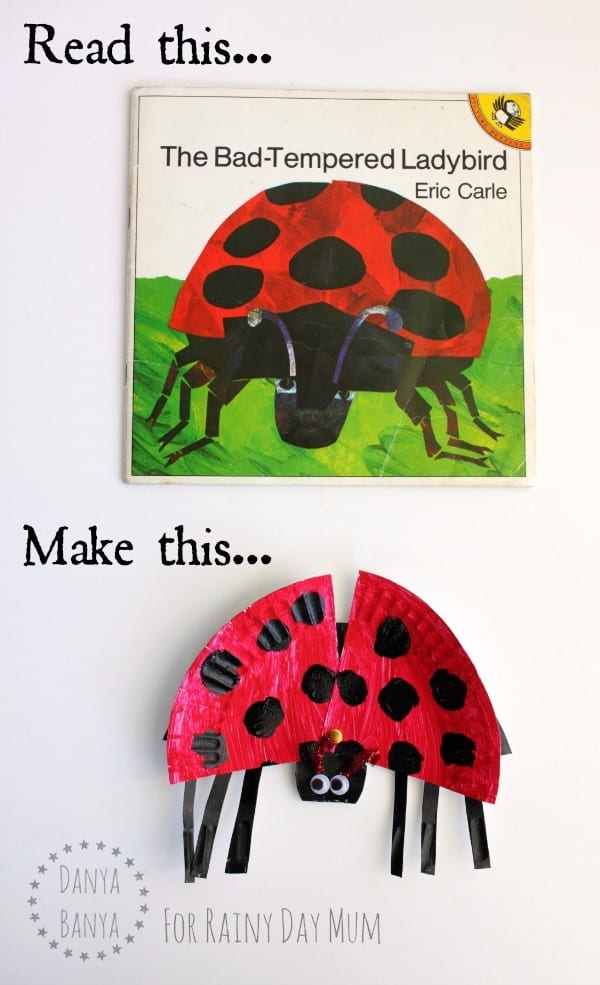 Hello Rainy Day Mum readers! I was a such keen reader of last year's fantastic Story Book Summer series, so you can imagine how thrilled I am to be participating this year! Thanks Cerys for inviting me!

Oops, but I haven't introduced myself yet. My name is Danya. I live in Sydney, Australia with my husband and our two daughters, 5 year old 'JJ' and 2.5 year old 'Bee'. We get up to all sorts of creative fun together, and I write up some of our antics on our blog Danya Banya.

And today I have a fun ladybird craft, with wings that open and close, to go along with Eric Carle's storybook The Bad-Tempered Ladybird!

Have you read it yet? It's about a grumpy ladybird who has more bravado than sense, as he tries to take on larger and larger animals, ending with the largest animal of all, the blue whale. It's a great book for introducing relative size concepts. It also makes a handy prompt for discussions about bullying and appropriate behaviour. And it's quite amusing to think of a bad-tempered male ladybird, when these animals are usually stereotyped as being pretty, feminine and delicate. 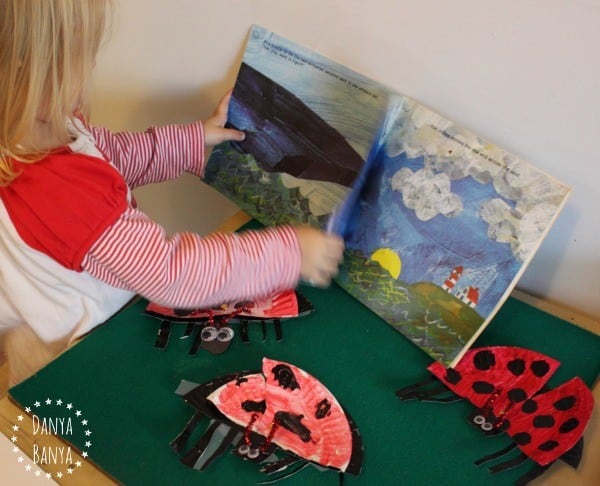 My kids are both animal-obsessed, so they especially loved seeing all the different species of animals in this book, guessing which one would come next. We also talked a lot about what 'bad-tempered' means, and the importance of being kind.

We had so much fun making ladybirds of our own. And they can fly! Well, sort of. Their wings can spread out as though they are flying anyway. 🙂 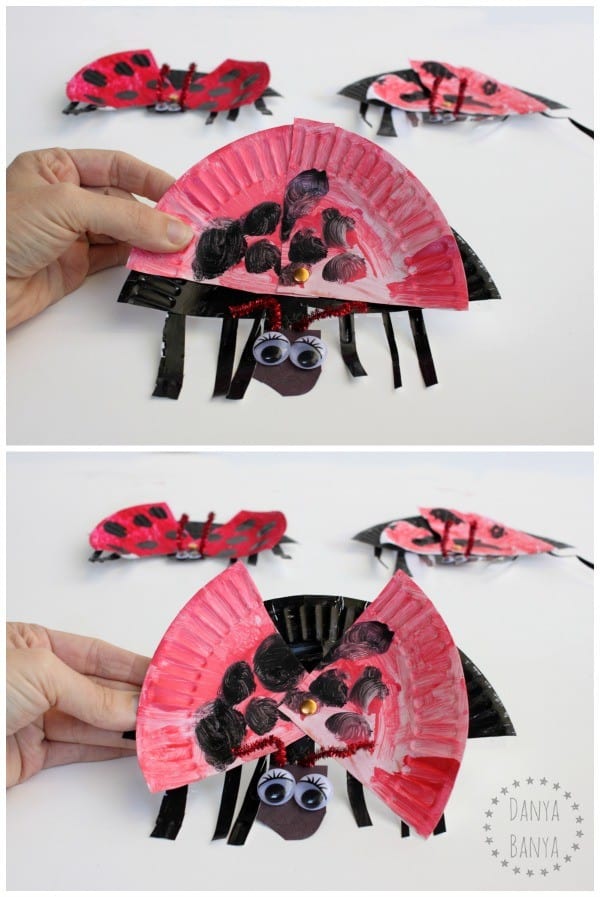 We have included links to the products and books used in this activity. If you buy from these links we may earn a small commission.

How to make the "flying" Ladybirds

1. Cut the paper plate in half, and paint one-half red and the other half black.
- If kids happen to cut unequal 'halves', then have them paint the larger 'half' black.
- We tried various water-based and acrylic paints. The slight waxing on the paper plates made the water-based paint look washed out. So, if you can cope with the potential clothing stains, then I'd recommend acrylics. 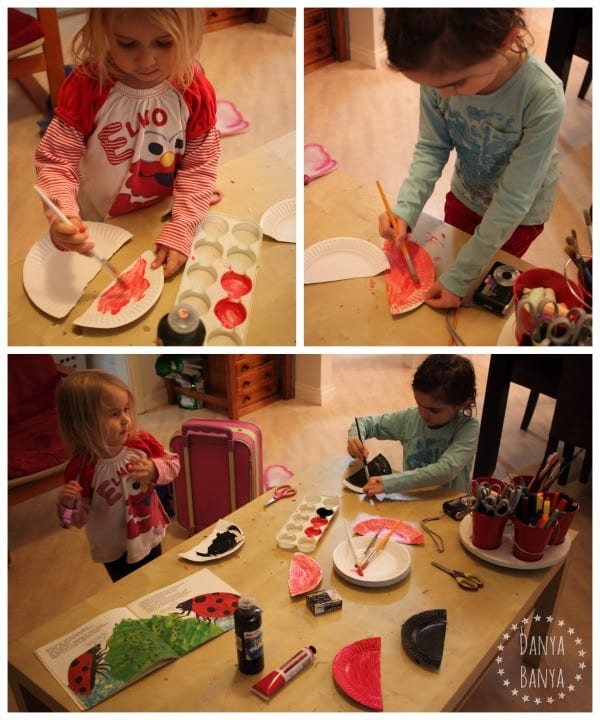 2. Paint black spots onto the red half of the paper plate.
- We did this with black acrylic paint while the red paint underneath was still wet, and it worked out fine.

3. Once dry, cut the red and black spotted half in half again.

4. Using the black half of the paper plate, cut an inch strip in from the edge, leaving approximately a inch square in the middle.
- This is a bit tricky to explain, so please refer to the photo below. You can round the edges of the middle square if you want to - this will end up being the ladybird's head.

5. Poke a hole through the corner of both the red and black spotted pieces. Poke a third hole about a centimetre (or half an inch) behind the ladybird's head.
- Adult assistance is required here. I used a sharp wooden skewer. A thumb-tack or similar would also work. 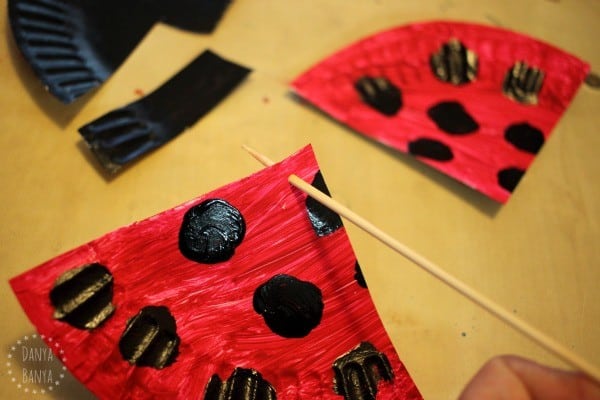 6. Push the split pin through the red and black spotty pieces, and then lastly through the hole in the black piece, splitting to fasten on the back.
- You now have wings that can open and close. Open them up to the point where it looks like the ladybird is flying, and use this to work out where to put your antennae later on.

7. Cut the inch strips into thirds lengthwise. These will be your six legs. Attach with sticky-tape. 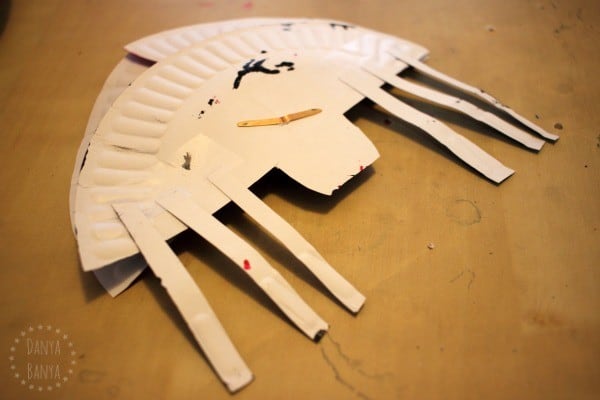 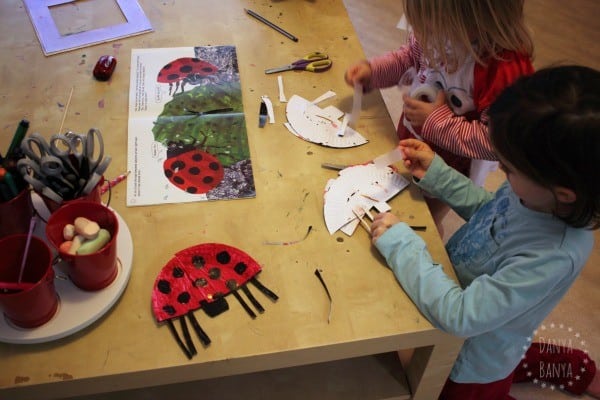 8. Poke two holes towards the back of the ladybird's head. Cut a pipe-cleaner into thirds. Take one of the thirds, and thread it through the two holes to make antennae.
- Make sure that the position of your antennae won't block the ladybird's wings from opening.

9. Glue on googly eyes.
- We used a low temperature glue gun to attach the googly eyes. You could also use white round stickers for eyes, dotting with a black marker to make pupils.
- I hadn't factored in that my 5 year old daughter JJ had cut a rather small head for her ladybird, and then wanted to use some very large googly eyes (with eyelashes) that wouldn't have fit on her ladybird's head. We got around this issue by cutting a larger head out of dark construction paper and sticking this on, before attaching the googly eyes. 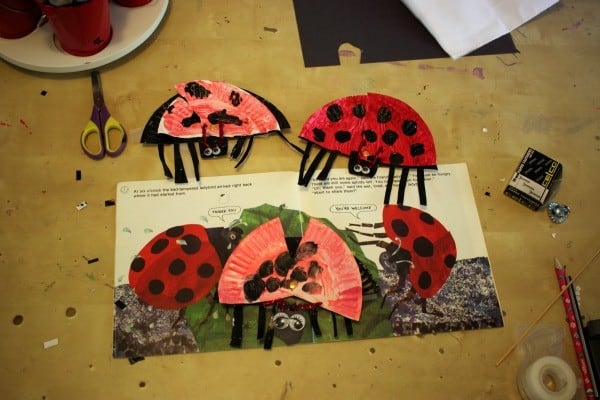 I was really happy with how this craft turned out. JJ (my 5 year old kindergartener) could do almost the entire craft unassisted, only needing help with creating the holes and inserting the split-pin. My toddler Bee needed a bit more help, but she could was able to do all the painting and taping, and some of the cutting. I think they both did a great job! 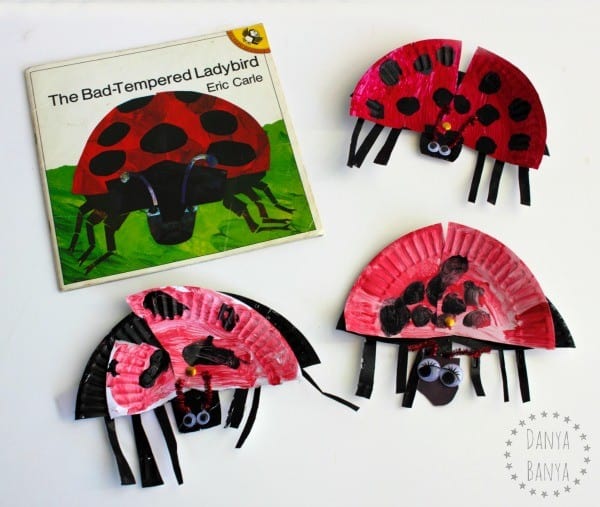 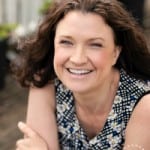 Danya is a fun Aussie stay-at-home mum to two spunky little girls, JJ and Bee. They spend their days playing, creating, experimenting and giggling. Danya spends her nights writing all about it on her blogs www.DanyaBanya.com and www.GoScienceGirls.com.