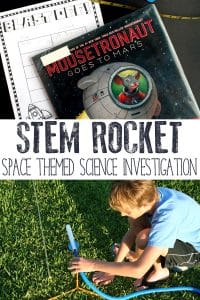 It’s time to head of into outer space with this fun rocket experiment for kids. Based on the on of our favourite space books for kids this Space Themed Activity is ideal for doing with kids of all ages using a stomp rocket.

Our story is Moustronaut Goes to Mars, about a mouse who hitches a ride on the first human spaceflight to Mars.  He stays hidden for six months. Then, as they finally reach Mars, their landing craft engine has a problem that only a small mouse can solve.

The story includes interesting details of space travel, such as the heavy vibration of the rocket on launch, and an illustration of how astronauts sleep in space. It’s a simple enough story for an older preschooler to follow, yet interesting enough even for my elementary aged kids.  My oldest, Liam, eagerly read the detailed nonfiction afterward about the history of human’s understanding of Mars, and our past and future explorations of the red planet.

Learning About MarS with kids

Liam and of one of my twins have long been fascinated by all things space. We live near Houston, and love visiting the space center here. They have some cool exhibits about Mars.

One of them lets kids pretend to launch two different rockets, one to the moon, and the other to Mars. I think the point is to show how much further Mars is. For my kids, though, the point was to see who could launch their rocket first and highest. I had a hard time getting them to leave.

Rocket Play as a Learning Activity

So later at home, they were all for it when I suggested we pull out our Stomp Rockets. We’ve had ours since Liam was about 4, and the kids still like playing with them. They love trying to send the foam rockets as high in the air as possible. We’ve also set them up in a big open area to send them as far horizontally as possible.

The cool thing about sending the rockets out horizontally is that you can more easily measure how far they go. That way, you can turn it into an educational activity. We set up a simple science experiment that give the kids practice with measurement and using the scientific method.

I teach kids about the scientific method by telling them to make sure their test is fair – we set up experiments so that everything is exactly the same except for the one thing we’re testing. They totally get it when you explain it’s about being fair.

We talked about what might make the rocket go the furthest, and decided to test stomping on the rocket at a run versus from just standing and stomping. You could also test a different variable:

Of course, you could also use a kids’ DIY rocket, and test features of its design or launch method.

To do this activity, you’ll need the following items:

Whether your child is more interested in the story or the activity, there are plenty of fun ways for kids to learn about Mars, space travel, and the scientific method.

Pin this Fun Space STEM Invesitigation to do later 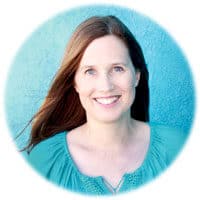 Heather from Books and Giggles

Heather is a teacher turned stay-at-home-mom to a son and twin daughters. In her (limited) free time, she loves reading, sailing, and outdoor adventures.

You can find more of her educational activities, seasonal crafts, and picture book extension activities over at  Books and Giggles , or connect with her on Instagram, Facebook, or Pinterest.