One of my childhood memories is of Shrimp Netting on the North Norfolk Coast, it's something that I added to our Summer of firsts 2012 for J (not T just yet) to do and I was so happy that a couple of weeks ago we had some great weather and were able to get to the beach with Nana and Pops. Pops is the ultimate shrimp netter and he took J, my nephew Z and Auntie A to the sea for an adventure in the waves. 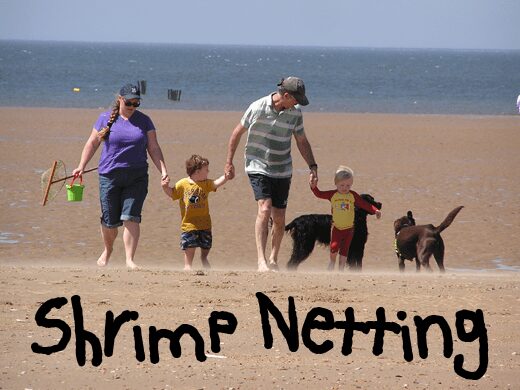 Now shrimp netting isn't using large nets it's hand shrimp netting pushing a flat bottomed net along the sand in the waves to collect shrimps for cooking or anything else that you can find. In the picture above Auntie A is carrying the net - this net is ancient (well at least as old as I am) and we are looking for some more so that we can have our own one but they would be easy enough to make.

Pop took each of the boys out in the waves pushing the net in front of them to see what was under the water and living in the sand - isn't it such a great way to explore somewhere that you wouldn't normally be able to see without getting your face in the water. When they pulled the net up they returned anything duplicated to the sea and kept the unusual things to show Nana, T and me on the beach.

J was fascinated by the finds in his bucket - it was lovely to see him interested and wanting to know about what he had caught as well as very proud showing myself and Nana as well as attempting to show T (although she wasn't at all interested).

In our catch was 2 different species of crabs, a sea louse and a cockle. With a bit of water in the bottom of the bucket it was possible to keep the creature on the beach in the shade of our UV tent whilst we looked at them in more detail.

As I have mentioned before J is very gentle with creatures that he finds and it was no different with the crab - however the crab was not as gentle with him and Pops and I taught him the correct way to hold a crab so as not to get pinched (from the back between the back legs - not across the top of the shell).

Our book link this time is I'm the Biggest thing in the Ocean - it's a great book with a range of sea creatures from the smallest plankton to the largest Whales included. The pictures are great and because it covers the small creatures it was really good to speak to J about some of the smaller animals in the sea as well.