As you can probably tell we like messy play but I’m a little ashamed to admit it but we’ve never used shaving foam in any of our messy play. Well partly it’s due to the fact that we never have any in the house so it’s not something that comes to mind. But after seeing some fabulous ideas around the blogosphere I decided to purchase some…. but we’re starting simply with just adding some colours to it on a tray. 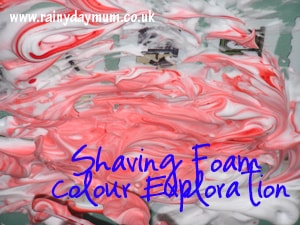 What you need for some shaving foam fun

How we made the shaving foam fun happen

J is going through a strange stage at the moment initially with anything he hates getting his hands messy so when I set up the tray on his table in the kitchen (our messy play indoor location) he was very reluctant to play with the shaving foam unlike T who dove in and then had to be removed as she seemed to like the taste! so I gave him some straws and added some food colours to the foam.

I added different colours to the foam and he mixed them together foaming mountains with the foam which when the shaving foam had become brown in colour he asked for some more white foam to add to the top for some snow to go on yet again where he gets the ideas from is beyond me but I sprayed more.

This was such a great activity sensory but also with a learning element as he discovered that purple is made from mixing red and blue (yes there may have been some mummy input in the colours that we added and the sequence of them to the mix) and that you can make brown by mixing all the colours together.

A warm welcome to Rainy Day Mum, your hub of ideas and inspiration for kids’ activities, learning, crafts, and tasty treats they can cook themselves. From tot to teen whatever the weather there’s always something fun to do.
84 shares
84 shares