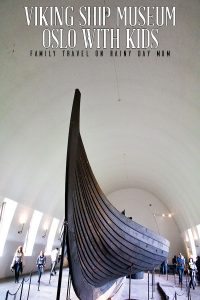 One of our favourite museums that we have visited recently with the kids is The Viking Ship Museum in Oslo, Norway. We are fortunate to have friends that live in the country so took them up on the invite to visit and on the way explored a little bit of the capital city Oslo. The Viking Ship Museum is an excellent introduction to The Vikings and their ships.

Located on the Bygdøy peninsula in Oslo the Viking Ship Museum contains 3 of the best preserved Viking ships in the world as well as artefacts and more from the era.

As this isn’t a huge museum we spent around 2hrs here looking at the displays, ships and watching the video presentation.

Our Family Review of the Viking Ship Museum for Kids

I’m handing over to the kids to give you their highlights of the museum first before I go into mine.

The skeletons of the Viking was my favourite bit. I liked looking at the bones and reading about how the people died and were buried!

Within the museum, there are skeletons that were found with the boats on display. The two that we found the most interesting were the women who were buried with the Oseberg ship. A woman in her 50’s and another in her 70’s or 80’s. These were likely women of great importance within the community as they were buried with their ship.

I really liked the video of the Vikings. It was fun to watch them build a boat and then see the battle and watch them bury them. The music was good as well that went with it!

The video presentation that T talks about is Vikings Alive! Shown 3 times an hour it is worth taking time to watch as it shows on the ceiling of the museum above one of the ships.

Clearly researched and using shadows, illustrations and music it’s a great way to see how a ship is believed to be constructed, then used in exploration around the coast of Norway as well as being used a burial for a King.

As well as the kids favourites there is an amazing collection of artefacts discovered with the burials of the ships.

From household items like cutlery and plates through to musical instruments, transportation and clothing.

This is also a working research museum so among the displays and artefacts there are extras which as a scientist and teacher I found fascinating.

Like a 3D camera taking pictures of artefacts to create printed objects in the future to study or the equipment used to research how to keep the ships preserved longer.

Knowing that during Keystage 2 the children learn about Vikings in history this was an ideal opportunity to combine a bit of travel with learning in the best possible way.

If you are in Oslo and traveling there with kids (or without) this is a museum that we would highly recommend. It’s a perfect thing to do on a Rainy Day in Oslo with the Kids.

How to Get to the Viking Ship Museum Oslo

We travelled independently to Norway and used public transport during our visit. So although there are parking facilities at the museum this was not something we used.

Instead we investigated reaching the museum by bus and by ferry.

The Number 30 bus leaves from NationalTheatret out to the Bygdøy peninsula and you exit the bus at Vikingskipene.

Buses leave regularly throughout the day and it’s only a 6 stop journey from the centre.

Because we wanted to see a different side of Oslo from the streets we took the Ferry from
Rådhuskaia (the City Hall pier) to the Bygdøy peninsula.

The ferry takes you across and then there is a walk to the museum through the street of the Bygdøy peninsula. The kids really liked this as they got to see a different area of Oslo than the city centre.

These are the prices as correct at time of publishing – please check the official Viking Ship Museum site for more up to date information.

The price for us for entry with a 7 and 9-year-old and 2 adults was 200 Norweign Krone as children under 18 are free. This is approximately £18 or $23 (again check the exchange rate to convert to your currency).

The Viking Ship Museum is open

Check the site above for information on which days the museum is closed or if they have early closing for what every reason.

What Facilities are there at The Viking Ship Museum

The museum is not a huge museum as said before we spent about 2 hours here before venturing on to another museum in the area.

Outside of the museum enterance there are a set of lockers that you are asked to use for large bags. We had everything with us as we were heading back to the airport later that day so we used the lockers to store our bags in before heading in to the museum.

Next to the lockers there is a little cafe serving snacks and drinks. The kids enjoyed the hotdogs there and we were able to get coffee too.

Inside the museum there is a shop which has Viking Souvenirs including a great selection of Viking Books in English as well as other languages.

In the basement there are bathrooms as well.

Visiting the Viking Ship Museum with Toddlers and Preschoolers

Although our kids are older now we like to look at the museums and areas we visit in terms of visiting as a family with multi age kids. So whilst there I looked around and checked out how easy it would be with toddlers and preschoolers.

The museum is mostly accessible using a stroller. You can access the basement for the toilets with a wheel chair lift although I think you would probably find it easier if there are 2 adults to leave 1 with the buggy on the main floor and take your child down yourself.

The viewing galleries to look down on the ships aren’t accesible with a buggy so your toddler or preschooler that is in the stroller would have to walk up the stairs to look down. But it is worth doing as seeing the ships from the top is something else.

I think that the video presentation mentioned above would be great to watch as it is projected above them and there are seats to sit on whilst you watch it.

Head over to our family travel site Travelled So Far and discover some more Museums in Oslo to visit with Kids.

You don’t have to go quite as far to experience the Viking as Norway. Check out the review of The Jorvik Viking Centre in the city of York over on Pigeon Pair and Me