Starting today and on Sundays I’m going to be putting up an occasional Parenting post. If you are interested in guest posting with a parenting post for Babies and Toddlers then please get in touch with me via rainydaymum [at] gmail [dot] com. 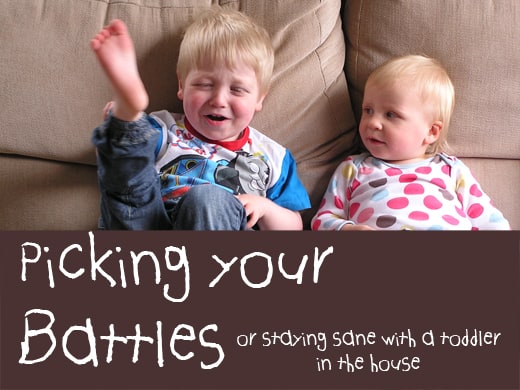 When I first had T, J was only 18 months old so not quite into the Two’s yet. However he was teething and had difficultly dealing with not being the centre of attention – his world was turned upside down who can blame him. For a couple of weeks I was trying to get him back to being the lovely 18 month old that had been there on the 1st March just a week before T was born. But it wasn’t working and I was getting more and more stressed and worked up (lack of sleep and hormones).

A lot of wise women, including my mum and my friends with more than one child, kept telling me the same piece of advice “PICK YOU BATTLES“.  I didn’t get it – we weren’t battling he was just a toddler and I needed to teach him in a gentle way what was right and what was wrong. But it was fight and I was losing the will to carry on.

I discovered what they actually meant was decide what is most important and those are the things that I needed to deal with.

We were going through biting, throwing things at T, refusing to eat anything that was offered – all of which I know is normal toddler behaviour but a week before she was born we weren’t experiencing any of it.

So how did we go about picking our battles

A warm welcome to Rainy Day Mum, your hub of ideas and inspiration for kids’ activities, learning, crafts, and tasty treats they can cook themselves. From tot to teen whatever the weather there’s always something fun to do.
2754 shares
2.8K shares