Once Upon a Time…. I had this cute little bundle that was 10 weeks old and he started to sleep through the night yes a whole 10 hours in a row – breast fed and it was his habit he did it for weeks and weeks and weeks. My Mum turned to me when I was saying how good he was and said “It’s a Phase” I think I secretly laughed and thought no I just have the perfect little baby. 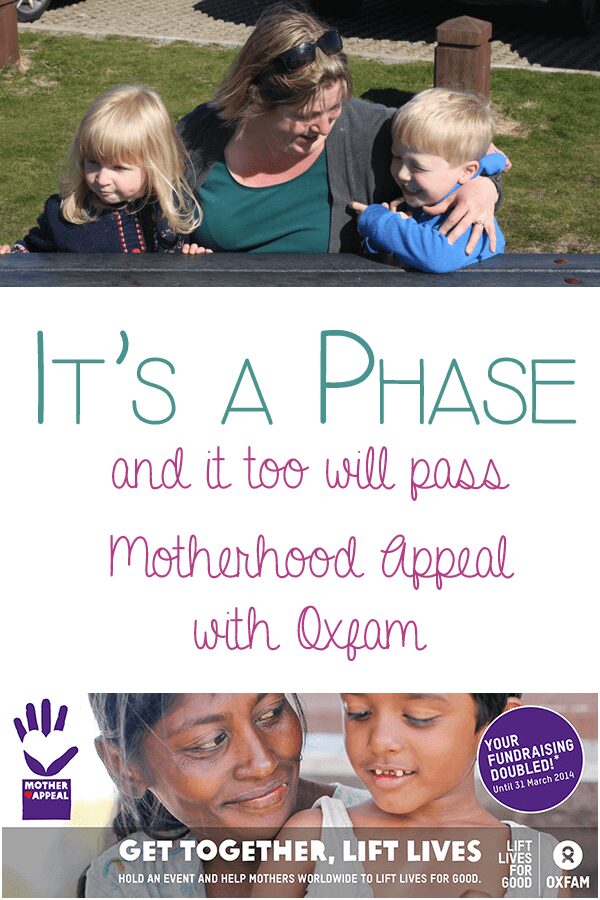 He slept, occasionally waking up but most nights he slept until he was around a year and 5 months – and I was 30 weeks pregnant and at that point he woke up all the time, he also started biting just me and again my Mum said “It’s a phase and it will pass…” as the months rolled on 38 weeks pregnant and he was almost 19 months old T arrived he still bit and once or twice bit her but continued biting me then started the hitting and screaming at me “It’s a phase and it too will pass” my Mum said again.

He stopped biting all of a sudden – I guess it was around 2 and a half I have forgotten – it’s strange I can recall the exact day that he started biting but can’t for the life of me remember exactly when he stopped – just that I suddenly thought “Ohhhhh he hasn’t bitten me in ages”.

Since then there has been many phases and T has gone through just as many – at the moment we are at with J growl at us and hit and kick us when he doesn’t get his way (he’s almost 5) and T is refusing to eat a lot of things from being a really good eater – including wanting “Cheese on toast – but don’t put cheese on it mummy – I want cheese on toast but no cheese”. At each of these points the phrase and advice my mum gave me when she also said “It’s a Phase” reverberate through my head – it’s a phase it too will pass, s/he won’t be like this forever do adults act like this – just keep calm deal with it as you parents acknowledge that it’s an undesired behaviour as you feel right and then in a year, two, ten years look back at this moment in time and it will be short – a blink in the time that you have had with your child.

At times it’s hard to think outside of our house and how I am struggling with the kids – but then I think outside of our immediate world I remember families that I have met in my struggles – I spent 3 years living with a family in the jungle of Costa Rica – the first year I lived there we didn’t have electricity candles and torches were our only form of light when it went dark at 7pm every night (no seasonal shift in daylight being so close to the equator). The family a few years previously had been supplied with packs from Oxfam and from other Charities because of the Earthquake that had devastated the country the lived below the poverty line their phases were real struggles how will they feed the family – 42 in total lived in a compound 10 minutes walk from the lagoons and canals, 40 minutes boat ride to the nearest track and pick up truck ride an hour into the town.

What do they do when they are sick, when a baby is about to be born, when it rains so much that for 19 days they are cut off living on a 1.5mile long by 300 yard wide island surving on a what they had brought before the rain started – by day 10 it’s a diet of rice and beans and eggs if the chicken lay by day 17 it’s rice and more rice.

They aren’t alone in this world – the mother’s in that family worked, they dealt with the problems, the children came first their phases that the children went through and yes I watched some of their children going through the biting phase, the not wanting to be left alone they just passed there was other things more important.

Charities supported them – the boat motor was repaired by one so that the children could go to school, another provided medication for the family when they were ill without payment, blankets were provided even more importantly solar panels were put in enabling them to start to earn an income by bringing tour groups to their community to work alongside them on eco-holidays.

Oxfam supports mother’s around the world and starting in March 2014 they launched the Mother Appeal helping to empower mothers around the world so that those less fortunate than us can succeed. Life the family I lived with the money raised can help a family to succeed. Join in the appeal and donate as much as you can afford as although our struggles are hard for us “It’s a phase and it too will pass” we have the opportunities and the means that we can move from the phase and make a success help others do the same.

A warm welcome to Rainy Day Mum, your hub of ideas and inspiration for kids’ activities, learning, crafts, and tasty treats they can cook themselves. From tot to teen whatever the weather there’s always something fun to do.
1 shares
1 shares