June 8th is World Ocean Day and as you know if you follow my blog I am a former Marine Biologist so it’s an important day to celebrate for me. I decided today to set up some small world play for J and T using our sea life creatures (which you can now get on the Rainy Day Mum Store) but as T would be playing with it I decided to use edible sensory ingredients to make it even more fun and safe for her to play with as well. 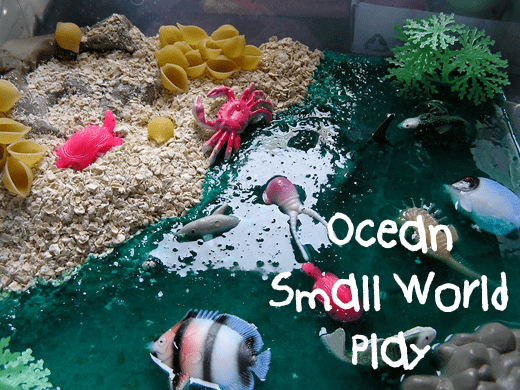 What you need to set up some Ocean small world play

How to set up some Ocean Small World Play

Yesterday I set up the first part of the small world play by making some ocean jelly to use. I decided to use Jelly over anything else as it would be a great sensory experience for T (smell, sight and touch) and would be safer to use than other materials as although we are starting to come out of the other side of putting everything in our mouths we still have to explore new things in them first. We can’t get blue jelly (jello) in the UK so I had a packet of lime jelly which I made up and added blue food colouring to the mix which produced a great turquoise jelly. 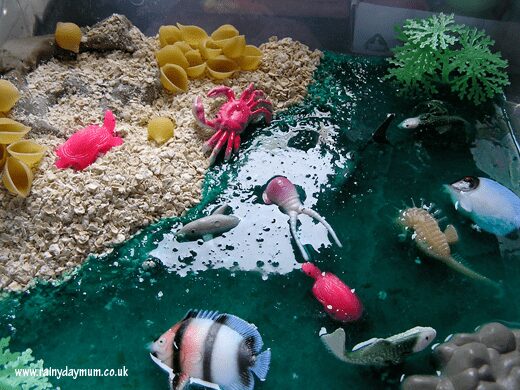 To set up the ocean/beach I used one of our storage tubs to contain it all. Then I added some of our homemade chocolate playdough (yes it’s still going strong! from the winter) in one corner. Used porridge oats for the shore line and then mushed up the jelly poured it in and added more water to the jelly side of it so that it was more liquid in consistency. On the beach I added some pasta shells and then J helped me add the sea creatures, sea weed and rocks to set up our sea shore. 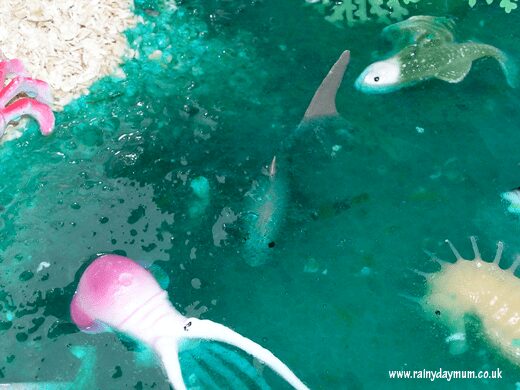 I knew this could turn messy for T so I set it up on the floor in the kitchen on a messy mat. Took off T’s clothes and thought it would be OK to leave J in his (well he’s almost 3 – but I was very silly). 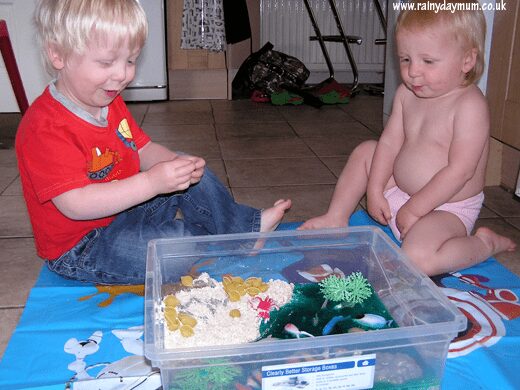 They both got stuck in. J was very into getting the fish to swim and the crabs to crawl up the shore. T loved the feel of the different textures in the box. I used dried pasta as I thought it would give a more realistic shell texture than cooked pasta shapes and it was great she kept putting them into the “sea” and taking them out again. 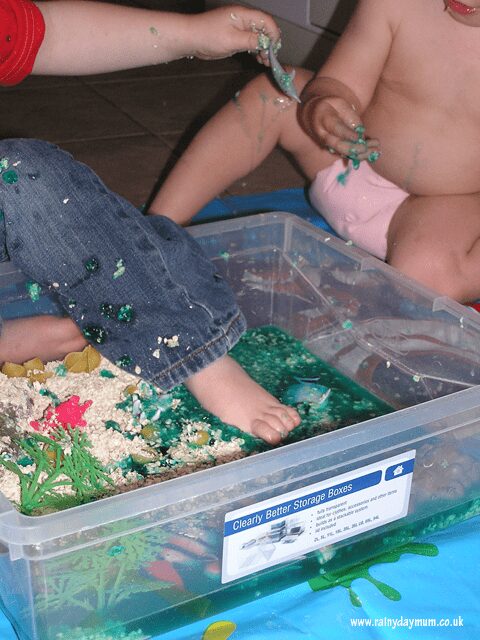 Of course we couldn’t have an ocean without doing a little paddling – I think this is the first time that J has wanted to explore textures with his feet but it was interesting his reaction – he didn’t like it – partly I guess cause I had had the jello in the fridge which meant that the ocean was very cold! 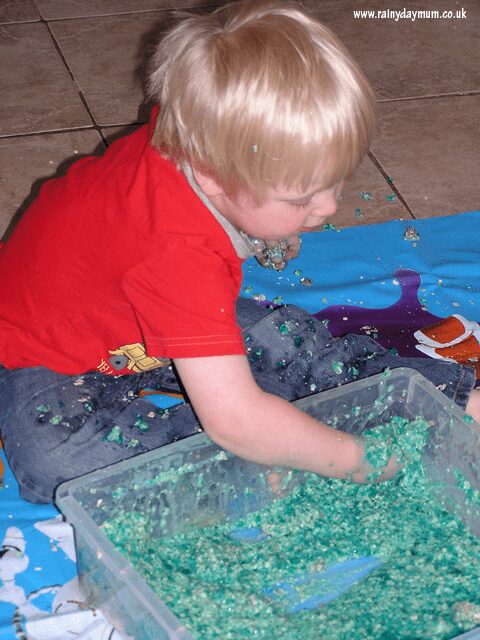 Of course I didn’t think the ocean would stay like I set it up – and here is how it was by the end of the morning. You can see the “Jelly mud” all over J, his hair, hands, legs and then he decided to use the potty so it was then all over the kitchen, toilet and everywhere in between.

An impromptu bath, kitchen clean and floor mopped and you would never know that we have had some incredible messy edible Ocean Small World Play all morning.

A warm welcome to Rainy Day Mum, your hub of ideas and inspiration for kids’ activities, learning, crafts, and tasty treats they can cook themselves. From tot to teen whatever the weather there’s always something fun to do.
1869 shares
1.9K shares