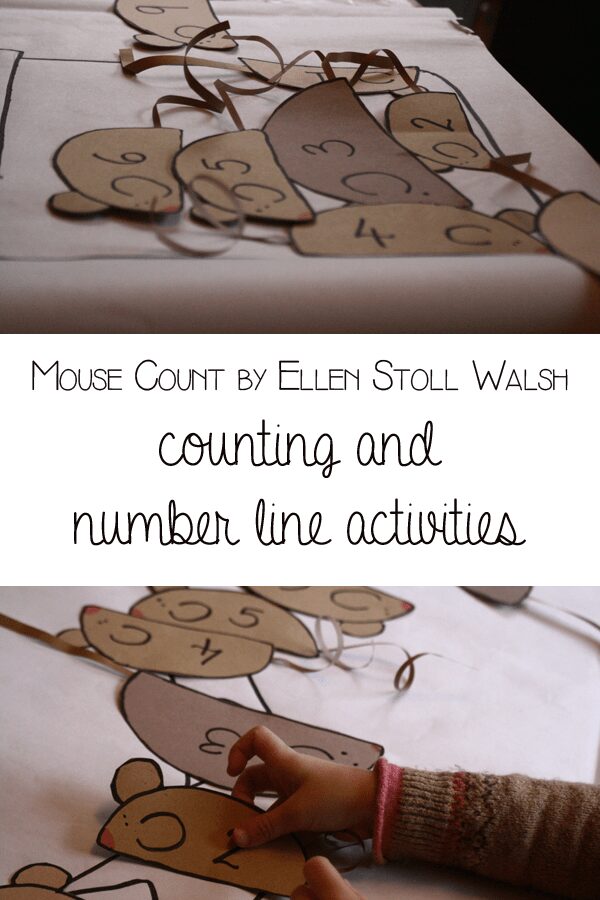 Mouse Count is a lovely book for preschoolers that focuses on counting to 10, and backwards from 10. A hungry snake hunts around for mice (his favourite snack), and counts them up as he finds them.  He puts them in a jar, and then he gets tricked by the mice, and they escape, counting backwards from the last one down to the first one in. We just loved the idea of the snake and the mice and the jar, and decided to create our own whilst retelling the story.

Large Sheets of paper - we used cut off parts from our easel roll.
Brown Paper or Card of different shades for the mice
Pencil
Scissors
Sticky Tape
Marker Pens

I set about creating the mice first. On the brown card and paper, I drew out 10 skewed semi-circles. I then added in a half circle for the ear, and drew another ear on the body. 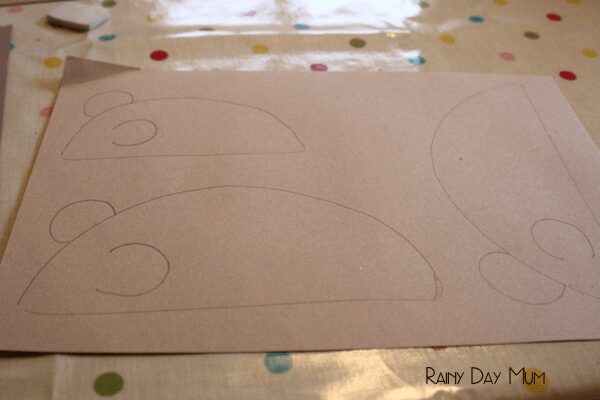 Then I cut them out. Using the scraps of paper cut thin strips for the tails, I used the blade of the scissors to curl the strips, like you would if you were making ribbon curls. Paper curls just as well as ribbon and it's great for making things like tails. 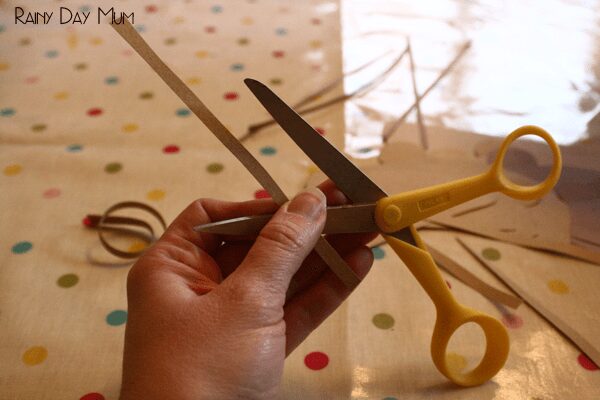 Stick on the tails to the back of the mice and then colour in a pink nose.  Outline the mouse with a black marker, add on 2 eyes. 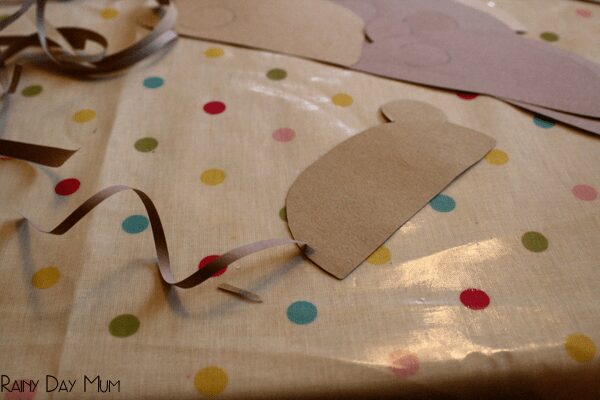 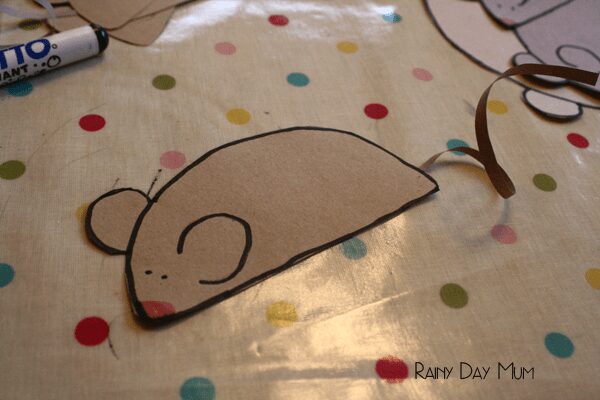 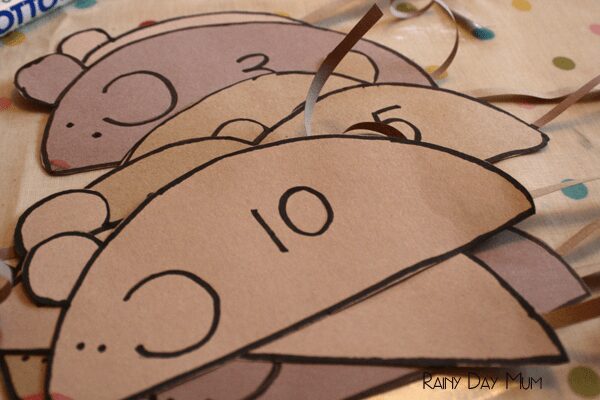 On a large piece of paper draw a long snake.  Divide it up so that there are 10 sections to the body, and number these 1 to 10. 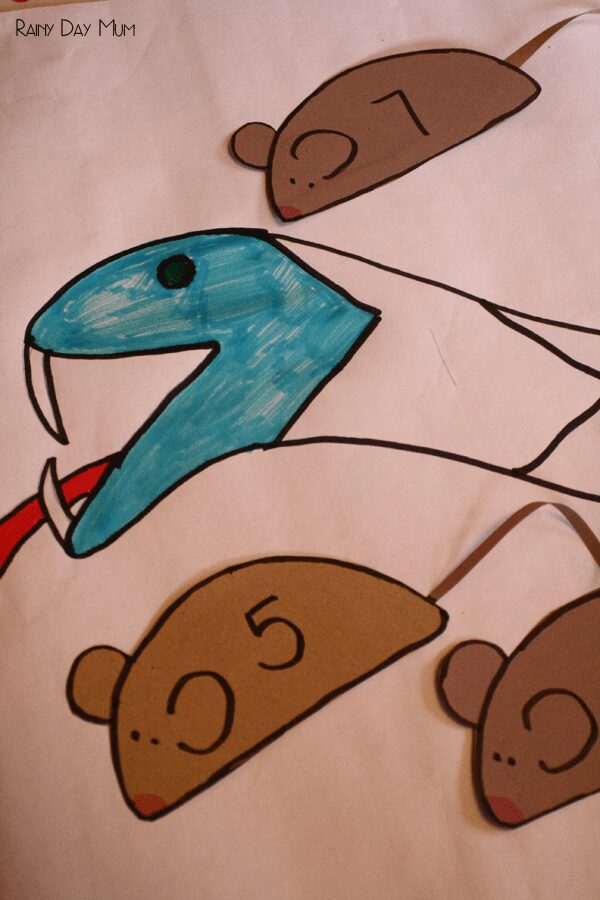 On another piece of paper draw a large jar shape that the mice can be put into.

T is at the stage of starting to recognize numbers. She can find 9 and 8 as well as 1, but then gets lost with the other numbers so using our snake number line, I reviewed the numbers along the body with her first, and then set out the mice in a random order around the snake. 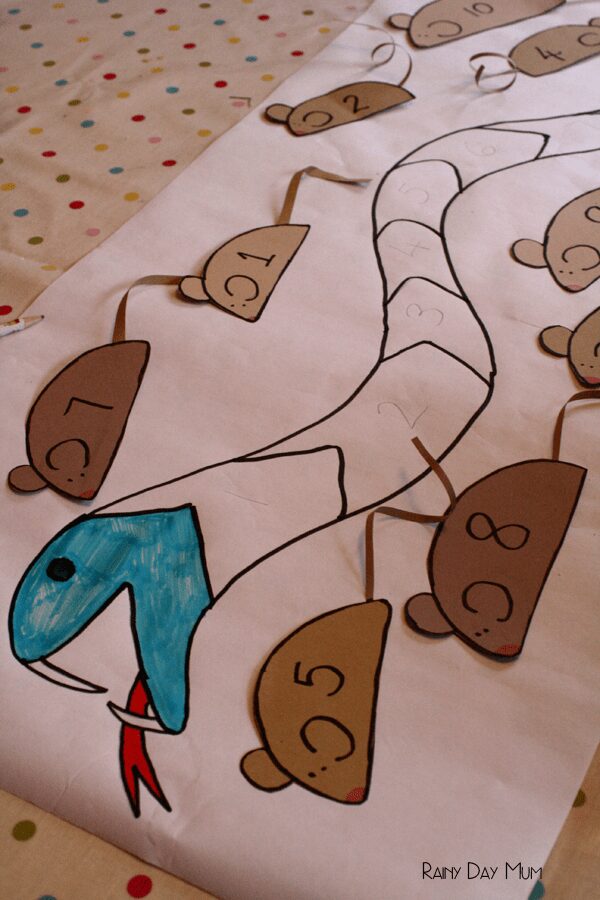 With the mice around the snake she picked up a mouse and "guessed" the number on it. Once we had the number correct she then matched it to the number on the body - as you can see I wrote the numbers in pencil which allows me to vary the order, or remove the numbers completely as she becomes more familiar with reading numbers. 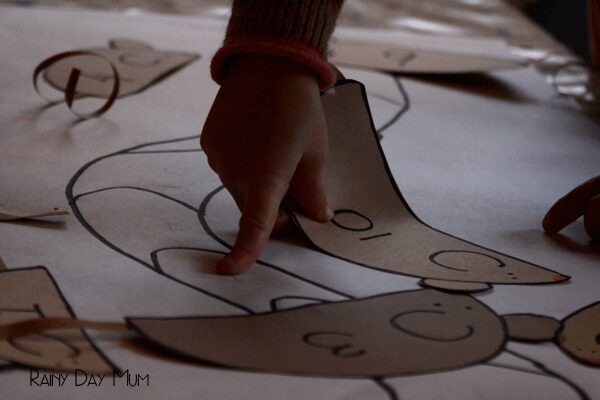 We continued matching the numbers and placing them on the body in order, reviewing what the number was, and counting the numbers so that she knew which ones were missing. 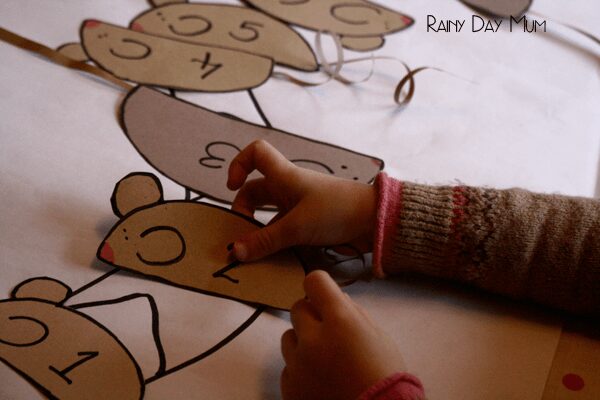 Using the big jar picture, I laid the numbered mice around the jar and said we were going to put the mice into the jar in the same order that the snake had put them in. 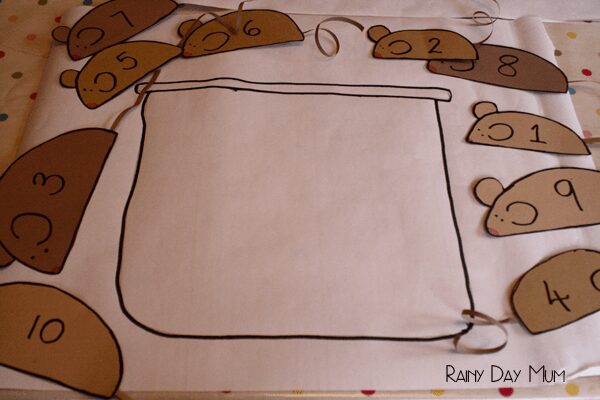 Reviewing the book, she noted that that meant from 1 to 10, and she asked whether we would be taking them out in order of 10 to 1, the way the mice escaped from the jar as well. 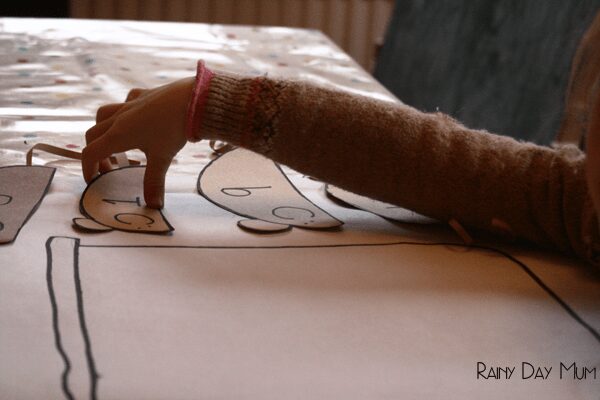 With the mice in a random order, she hunted for number 1.  She added it to the jar and followed it with the other numbers in order. She needed prompts for some of the numbers but this was a fantastic way to review and learn how to read the numbers. 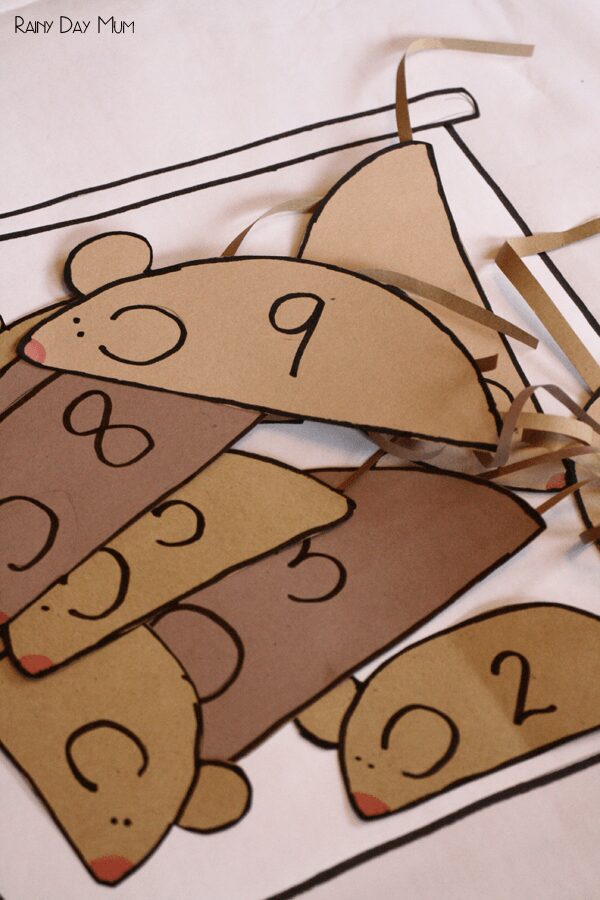 Once all the mice were in the jar,  she then took them out, counting back from 10 to 1. 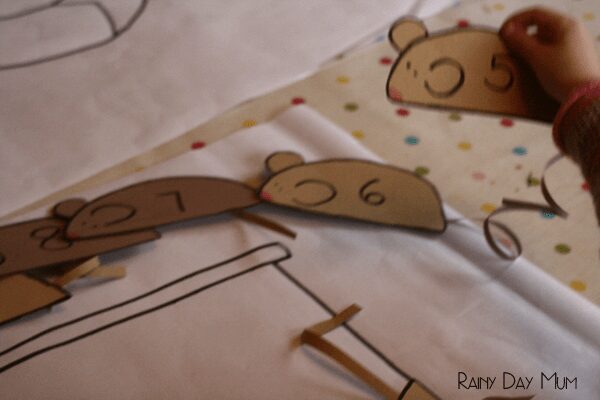 To extend this activity, I am going to change it up and shout out a number. She'll have to find the numbered mouse and add it to the jar until all the mice are in. We can then either take the mice out in order from 10 - 1 or 1 - 10 or continue calling out random numbers for her to find.

Check out the fabulous posts which bring the 3 books above alive for kids with crafts, play and learning. 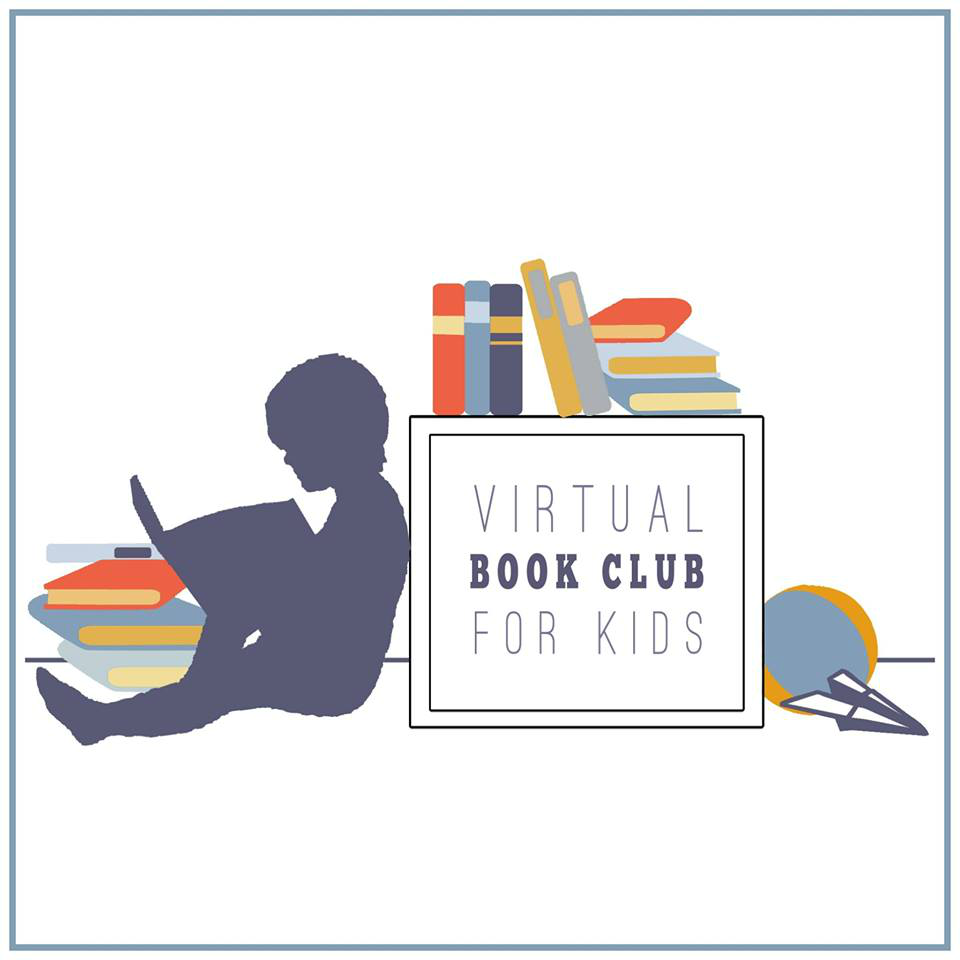