This is a very quick craft especially for the weekend and perfect for if you have a garden party planned or even if you would like to do a pretend party for your children and their toys (we are most likely to do this – although maybe Nana and Pops may join us). 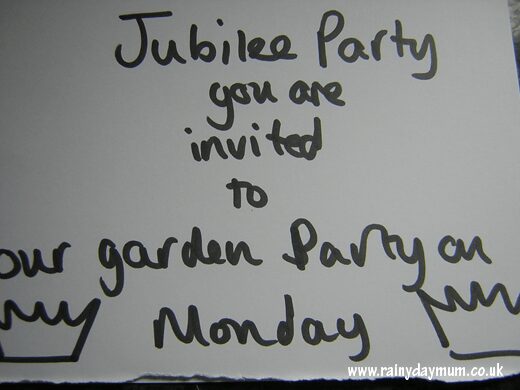 I think sometimes it is important that we go back to the simple things in life – and not over complicate the crafts that we do. There is so much inspiration around that I feel over whelmed so for this I’ve gone back to the basics with J and we used some card, my writing and crayons.

What you need to make some simple garden party invites

How you make the simple garden party invites

I folded a piece of white card in half and then I tore it (could have cut but then I would have had to have a discussion on scissors being sharp and that I needed to ask an adult to cut for me!!!!). On the now A5 piece of card I wrote “Jubilee Garden Party, you are invited to our garden party on Monday” and then drew some very rough crowns.

J, T and I sat down with our special (unbroken new crayons!) and started to colour in the invites – first J coloured in the crowns as he could see that these were meant to be coloured in. Then as he is prewriting but very interested in letters he coloured the letters and words in. This is great for introducing letter sounds and word formation.

We worked together he would ask me to draw an outline of something – we talked about what we would find in the garden and what we would need for a party – flowers, trees, sun – for the garden and CAKE for the party. I also tried to explain what the Diamond Jubilee was about – that it was like the Queen’s birthday but instead of how old it was it was how long she had been a queen – so I was asked do I have a Mummy jubilee for how long I have been a mummy – which I thought was lovely.

T helped colour in one of the invites as well – she sat in my lap and made some very basic marks – some lines but most of her marks were dots on the page (J never went through this stage of mark making as he wasn’t interested in doing any until much later and instead used to eat the crayons – when he started he made quite forceful lines on the page).

We have given the invites to a couple of our toys while we work out what we are going to be doing for the jubilee celebrations.

A warm welcome to Rainy Day Mum, your hub of ideas and inspiration for kids’ activities, learning, crafts, and tasty treats they can cook themselves. From tot to teen whatever the weather there’s always something fun to do.
10 shares
10 shares