J has rediscovered Humpty Dumpty he used to love it when I sung it to him as a baby but for a while hasn’t wanted to hear it and has said “NO NO NO Mummy” every time I have tried to sing it but in the last few weeks we’re back to liking it and him singing it as well to me and T which is very cute so we have a Humpty Dumpty Craft this week. 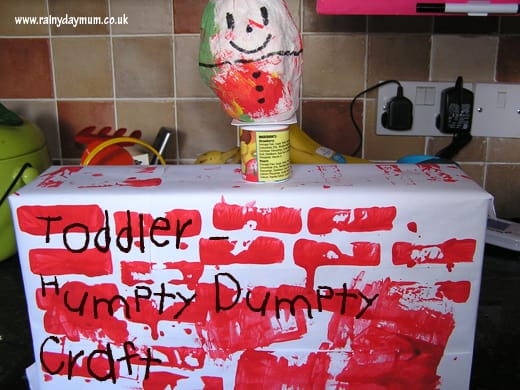 What you need to make Humpty Dumpty

How to make Humpty Dumpty

We selected a box from our junk collection to make into a wall for Humpty Dumpty to sit on and then covered it in white paper so that it was a blank canvas for J to decorate. We have been doing lots of painting without brushes recently and J decided to print the wall to make it look like our house wall so we looked through our toys and decided that the mega blocks that we had would make the best bricks on the wall.

Once the wall was painted (we did all but the bottom surface as that wouldn’t be seen) as J loved the printing so much he used different sides of the block to get different shaped bricks on the wall.

To make Humpty Dumpty (we did this over a few days as it takes a while for the first stage to dry). We used kitchen foil and scrunched it up into an egg shape then J and I had great fun tearing up some kitchen paper into smallish squares to cover the egg shaped with. 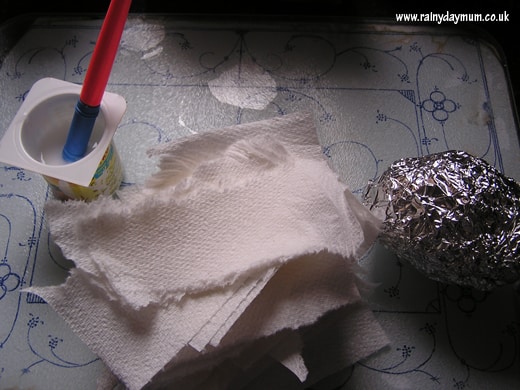 We mixed up a half and half mix of PVA (white glue) with water and then had a lot of sticky fun gluing the paper onto the egg. The egg was then left to dry for a few days isn’t it amazing how much glue a toddler will use! Once it was dry I dished out some paints for J to paint Humpty I’m starting to give him the 3 primary colours and a white at each painting session and he painted humpty with red and mixed up some green to paint it as well.

To finish it off I drew a face on Humpty Dumpty and we have had a lot of fun acting out Humpty Dumpty Rhyme- wiith J’s favourite part being him falling off the wall and going in all sorts of directions.

A warm welcome to Rainy Day Mum, your hub of ideas and inspiration for kids’ activities, learning, crafts, and tasty treats they can cook themselves. From tot to teen whatever the weather there’s always something fun to do.
654 shares
654 shares