Weekends away exploring the UK are one of the ways that we are ensuring that we are spending family time together which is one of our family goals. But, finding family-friendly hotels to stay at where we can all feel comfortable, rested and happy has been a challenge. We've stayed at some nice ones, but also some that we wouldn't return to. When the kids were asked to review the Holiday Inn Express at St Albans as a Kids Advisor for family stays we thought that it would be great. So me (Cerys Mum) is handing over to J and T the Rainy Day Kids and they are going to tell you all about the Holiday Inn Express and what they thought of it for families.

We have been provided with a nights stay and food for our review but all opinions expressed are our own. Please see our disclosure policy for more information.

The hotel Holiday Inn Express St Albans is a long way from our home. It took over 2 hours to get there in the rain.

But, it was easy to find. Just off the M25 and near a Sainsbury's and shops we got there OK.

The car park had a barrier and we thought we would have to pay but Mummy explained it was probably there to prevent people from parking in there that weren't staying at the hotel. She was right.

We unpacked the car and headed into the hotel.

The reception is really open with a cafe and bar next to the check-in desks. We spied some board games there for kids.

There was also some comfortable seats opposite where lots of families were sitting playing, eating and drinking.

The lady was really friendly we had to wait a bit as she checked in someone else. But, even though she knew that we were VIPs for our stay the other family got told exactly the same things as us.

We were told meal times, food choices and that there were local pubs we could go to.

When we had our room key we headed up in the lift to find our room.

The hotel has 3 floors we were on the 1st floor towards the end of the corridor from the lifts.

We think that the hotel has been decorated recently as it looked really new, clean and bright.

At the back of the hotel, there was a MacDonalds but we weren't going to eat there but so you know if your kids want a Happy Meal it's there.

We had a family room for the 4 of us. Mummy and Daddy got the big bed and we had to share. But, that happens a lot when we travel and it's not too bad.

On Instagram in the stories, we asked people if they had any questions and someone asked if there were connecting rooms for bigger families than ours. We asked at the reception and were told yes there were a few but you need to ask when you book for those.

In our room, there was a bathroom with a big shower. Mummy says she wants her bathroom at home like it so it must be good!

There was also a TV, lots of plug points and a very comfortable bed.

We both slept very well. J went to sleep first he was tired.

We really liked having a TV in our room. It didn't just have programmes on it. It also had the menu for the restaurant so we were able to choose what we wanted before we went down.

There were lots of channels with about 5 for kids. CBBC, CBeebies, CITV and 2 more we think for little kids.

There was also BBC 1. So after dinner we were able to come back to the room and watch Strictly Come Dancing in bed. Daddy says we can't do that at home as the TV will never go off. But it was so nice.

Food is important and we had 2 meals at the restaurant. Dinner and breakfast.

Dinner at the hotel

For dinner, there were some starters that Daddy had. He had chicken wings which were a bit spicy for us.

But, T had a stuffed crust pizza which was huge and covered in cheese and pepperoni. J had a burger. They made it exactly like he said - bun and burger nothing else. Mummy had a burger. We think they put everything from J's onto it too as it was covered in salad and cheese.

It was all delicious and big plates so we were full. We didn't even have room for dessert but there were ice-creams which we would have eaten if we had had room.

Breakfast was the best. We could go and help ourselves to the selections.

There were cereals. But we didn't have them, bread and cakes. Yummy muffins and croissants.

But the best bit was the cooked. J made himself beans on toast with bacon. T had sausages and bacon.

Mummy and Daddy made their own and had different stuff. Mummy said the coffee was great and we both thought that the apple juice was nice.

There is a lot to do according to the TV in the room. It had a guide to what to do on there as well as the menu.

But, we only went shopping and then to the best bit. Harry Potter Studio Tour.

It was only 15 minutes away on the M25 and we went. There was so much to see.

We're going to come again and have already said we have to stay at the Holiday Inn Express again because we can then go early and not have to be up even earlier than we do. 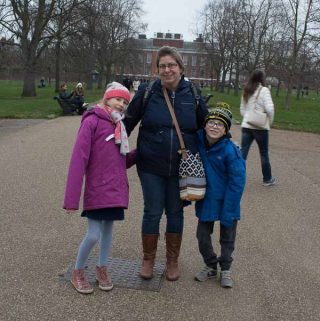 J likes animals and wants to be a jungle explorer and T likes science and wants to live on a boat and help the oceans.