As we head into year 2 (2nd grade) the maths that J is doing at school is starting to get a little more interesting and one of the ways that we’re working to support the learning at school is to find fun and playful ways to work on ideas that his teacher mentions that he needs support with as well as those that interest him. Today we’re joining in with cool maths for cool kids and working on some basic number skills – in particular addition and subtraction.

We’re at the stage of adding and subtracting double digits and although J can do this in his head one of the ways that he needs to be able to show it is on number lines and it’s something that because he can do it in his head he’s putting his foot down and not interested in working on – so taking an interest he has and mixing it up means that I can get him to work on it at home. My kids love bugs and as we’ve been watching grasshoppers jump around in the long grass on our evening walks it was the perfect animal to do some hopping addition and subtraction along a number line.

Discover more addition activities with our Thumbprint Addition Activity for some hands-on maths.

Cut a large length of easel paper from the roll and draw a straight line across the page. At regular intervals mark off a line and then number up.

Because I made our numbers quite close together I wanted them to be distinct and easy to hop from I drew a rough square around each number and attached to the mark on the line.

We’re working on addition and subtraction of double digits between 0 and 33 (although I could have gone up to 40 I didn’t have enough space on the paper) and will be adding and subtracting numbers up to 24).

Playing with the number line

The reason that I chose the easel paper for creating the number line is that it gives us lots of space to write the “number sentences” – sums at the top and bottom of the paper. J is at a stage that he understands place value and one of the ways that the number line activity is to work is a giant hop for the tens and then small hops for the units. 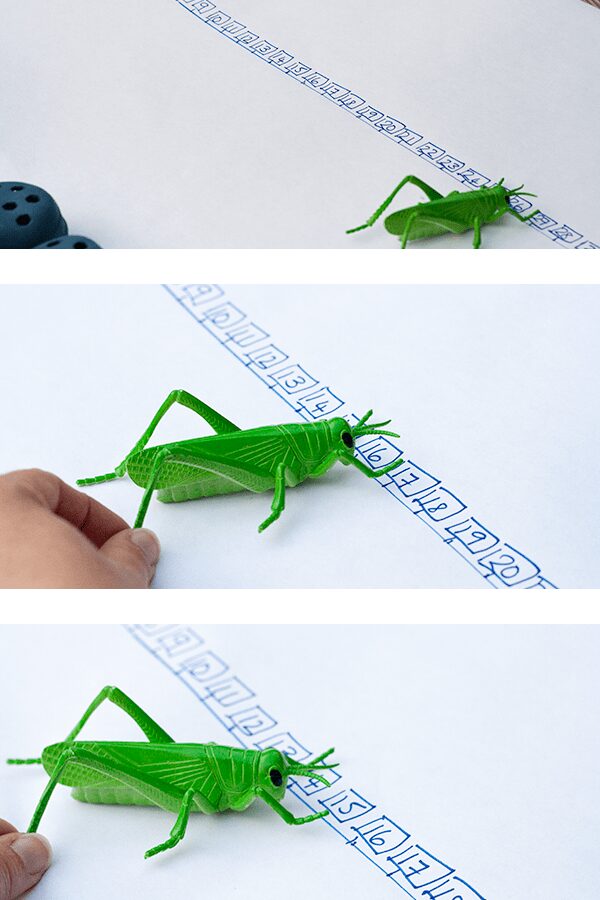 He jumped the grasshopper down to the 16 first in a giant hop – and then did 2 small hops to get to the 14.

More Number Line Activities with our Garden Number Hunt and Line Activity for Preschoolers to get active and learn their numbers.

I repeated with a mix of addition and subtracting getting him used to giant hops for the tens and then small hops for the units moving forwards and backwards along the line. 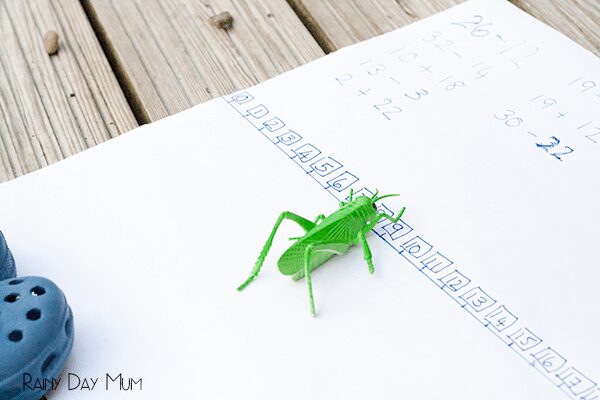 A warm welcome to Rainy Day Mum, your hub of ideas and inspiration for kids’ activities, learning, crafts, and tasty treats they can cook themselves. From tot to teen whatever the weather there’s always something fun to do.
137 shares
137 shares