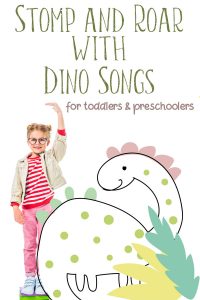 One of our favourite themes for fun activities to do with our toddler and preschooler at home is all about dinosaurs. My kids loved reading about the dinosaurs, playing dinosaur games and making dinosaur crafts. Another favourite of ours was to find some dinosaur songs to sing together. Unlike our classic nursery rhymes which I had been singing since I was little, there weren’t any dinosaur songs that I knew so we turned to YouTube and the Internet to find some rhymes and songs about dinosaurs to sing along with the kids. So if you are like me and you like to sing with your children then here are our favourite songs to sing along to with your kids all about dinosaurs.

If you have followed any of our Songs and Rhymes posts you know that I am a fan of adding in a little bit of learning and moving with the songs so with these fun dinosaur rhymes and songs you can expect lots to include counting or moving around.

Why not mix up these songs with some reading with our favourite dinosaur books for toddlers and preschoolers as well as trying some of our fun dinosaur activities and crafts perfect to do at home with your little ones especially on rainy days.

Our first song is a fun one to count with. It’s fairly easy to learn and is sung to the tune of Ten Little Indian Braves. We loved this as we would use any of our favourite dinosaurs and my two learnt this fairly quickly and soon we wouldn’t have to have the music on in the background we could just sing this along.

The lyrics are easy to remember just put your favourite dinosaur in front and you can get the kids to make an action to be like that dinosaur.

If you aren’t sure on the tune or would like to watch some cute little dinosaurs check out the YouTube video over on our Nursery Rhymes and Songs Playlist below and subscribe to our Rainy Day Mum Channel for more Pre-watched recommendations and our videos.

When looking for songs and rhymes I came across a version of the Dinosaur Hockey Cockey along with other dinosaur songs on Kidsparkz it wasn’t quite how we sang the original so we did a little bit of adjusting and came up with this version.

You can then follow this with right claw in, stomping your left and right foot in then you tail and then the whole dinosaur in.

My daughter’s favourite action rhyme when she was a toddler was I’m a little teapot. She would stand up and sing it wherever we were complete with actions. So when I came across I’m a mean Old Dinosaur with actions on KidsSoup I knew it would be a favourite. We spent a lot of time in our kitchen being dinosaurs and singing along to this and changing the words for our own version.

Yes it’s not the original version we found but the clap used to make my kids giggle and they preferred it to the original so we stuck with it.

Go to The Dinosaur Printables Games and Activities in our Store NOW!

A favourite song from rhyme time at the library we took the kids to was Teddy Bear Teddy Bear so this Dinosaur Song which is sung to the same rhyme is great.

Some of the actions that the kids would come up with scary and small and show some claw.

More Rhymes and Songs for Toddlers and Preschoolers

Action Rhymes for Toddlers to Move Around to