Winter seems to bring a lot more indoor play for us and we’re at the stage where small world play is becoming one of the most popular activities and truthfully one of the areas that I find the hardest to do. Here’s a mess free (later in the month I will post our messy small world farm play) small world play that I set up for J and T to play with. 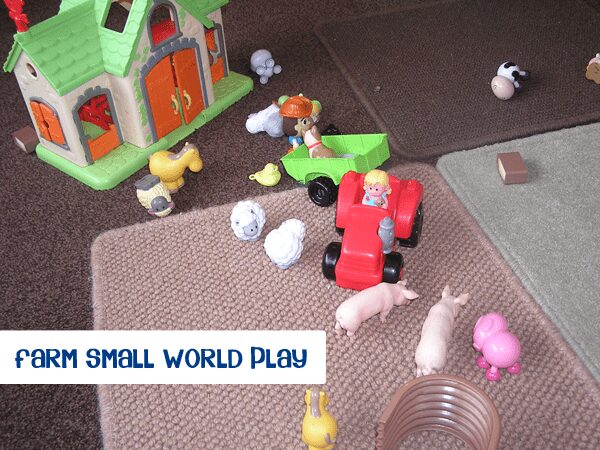 I really wanted to get the feel of different types of fields so I popped over to our local carpet store and asked whether they had any carpet squares that they were getting rid of and yes they did – a green and two brown were handed over. They are perfect, the browns have furrows in of different textures and the green has a texture which if you squint could be like a field of grass.

At the moment we have our Happy Land Farm in general play with J’s new Britains Farm in his room where little hands (and mouths of T) can’t get hold of them, hopefully it won’t be long until the put everything in our mouth phase is over. I set up the farm with the barn in a free square and the 3 carpet squares around it. Then designated certain areas as different things to start them off. 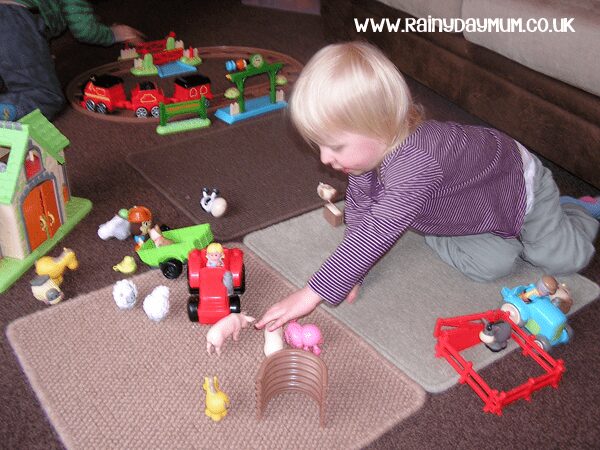 I find that J and T play better and easier if they find the play set up for them rather than help set it up at the moment I know this will change but it has taken me a while to work out what works best for my kids, with small world play I suggest you experiment with them helping you set up and you setting up in advance to see what works best for them.

With everything set up we set about playing with the farm small world, feeding the animals in the fields, ploughing and planting seeds that could later grow. 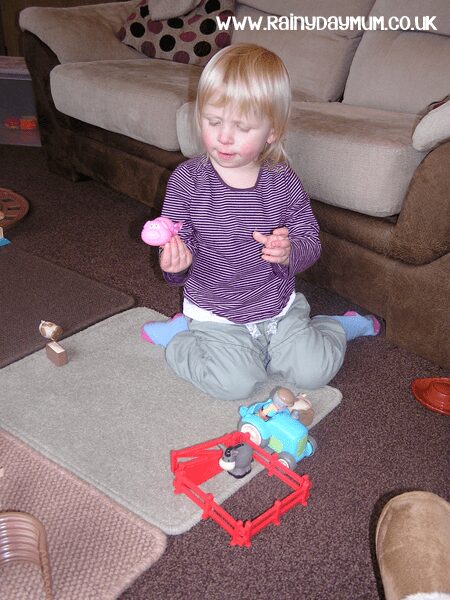 T although 18 months younger than J copies his play and seems to be at a similar play age to him despite the difference – whether that is a girl/boy thing, being a younger sibling but close in age or just her I don’t know but they are getting to the stage where they will occasionally play together but most of the time will play side by side.

A warm welcome to Rainy Day Mum, your hub of ideas and inspiration for kids’ activities, learning, crafts, and tasty treats they can cook themselves. From tot to teen whatever the weather there’s always something fun to do.
58 shares
58 shares