We’ve been regularly exploring outdoors since the beginning of the year and it’s been amazing all the things that J has discovered and learnt. But this week there was a real moment of awe and wonder. We visited the sea shore and found seals, lots of shells and star fish amongst other things. 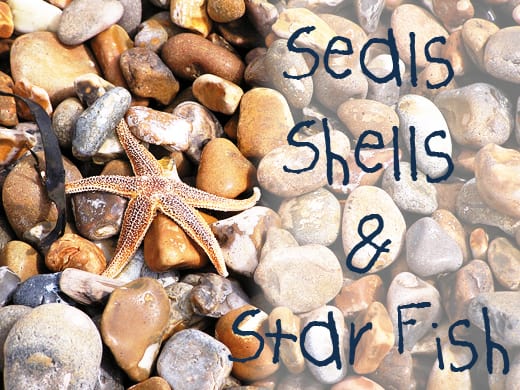 As a teacher one of the big things that was spoken about was creating awe and wonder in children and although I’ve seen it with J – especially the frogs they created wonder it’s always been fleeting and of the moment. However last week on Friday we took a gamble. Stuck our finger on a map and went to the location – The beach, a shingle beach not our typical go to beach for play.

Arriving at the beach it was shingles all the way with hills and troughs (not easy to negotiate with a baby on your back at all) but it was worth it. First thing was pebble throwing into the sea. Yes it’s April and it wasn’t overly warm but as soon as we saw the sea you could see J’s face light up. That moment of awe. It’s priceless and something that I want to see every day.

Suddenly from my back came the cry “LOOK WHAT THAT” T had spotted something – pointing out in front of us she had spotted a grey seal popping it’s head up right in front of us – looking more we spotted at least another four. J’s decided “Must show Daddy seals”. It was a fairly high tide and quite rough but with an amazing sky full of blue and a multitude of coloured clouds from pure white to the darkest grey. Every sight was a learning experience.

The pebbles were dark or light depending on where the waves had hit – I passed pebbles back to T in the carrier and she passed them back to me feeling the different textures smooth when I found a piece of flint rough when it was sand stone. Then we discovered the high tide line on the pebbles. A Treasure Trove of nature.

First was bladderwrack – one of our most common sea weeds – but J hasn’t seen it before as the beach we have visited with Nana and Pops is sandy without much hold for it to grow – yet here it was common along the line. J admired the texture, the bubbles and the slippery nature of it when wet.

The moment of wonder when looking closer we found a star fish – yes it was dead but he had never seen a real one he picked it up and we studied the legs, turning it over we could see where it’s mouth was and I pointed it out – lots of strange looks as he thought it was a tummy as it was in the middle ( I could see the logic).

Next find a mermaids purse, a quick explanation that it was either a shark or a ray egg case and a baby would have grown in it (it’s been collected and added to our newly created nature table at home). Then a crab was discovered – on it’s last legs and not fighting a toddler holding it – J held it with such care and tenderness he examined it all – taking it to look at the sea and see the waves and seals. He then laid it down in the surf and said bye bye to it.

We played for ages throwing stones into the sea, watching the seals play becoming more inquisitive and getting closer and closer. T on my back pointing to the birds flying around. We listened and spotted the sky lark flying high above us. On our way back we came across a clump of sea kale – a brasica and delicious when blanched and as a new experience for me and J we tasted a bit to see what it was like.

Our book is Clumsy Crab – a story of a crab that doesn’t like his big claws as they get in the way until he discovers what to do with them. We love it for the rhymes it has in it as well as the bright colours and pictures in it.

What moments of awe and wonder have you seen in your children recently?

A warm welcome to Rainy Day Mum, your hub of ideas and inspiration for kids’ activities, learning, crafts, and tasty treats they can cook themselves. From tot to teen whatever the weather there’s always something fun to do.
147 shares
147 shares