This week marks the last of the 2012 – 2013 Virtual Book Club for Kids Authors and it’s Donald Crews it’s another new to me author and we had a lot of fun looking at the titles on Amazon and decided which ones followed the interests of J and T – there were so many to choose from and with our love of water one stood out to us – Harbor (although the unconventional spelling for us in the UK!) – it meant that we could also explore some science fun at home out in the sun shine with some Floating and Sinking especially after seeing all of those boats float in the Harbour in the book. 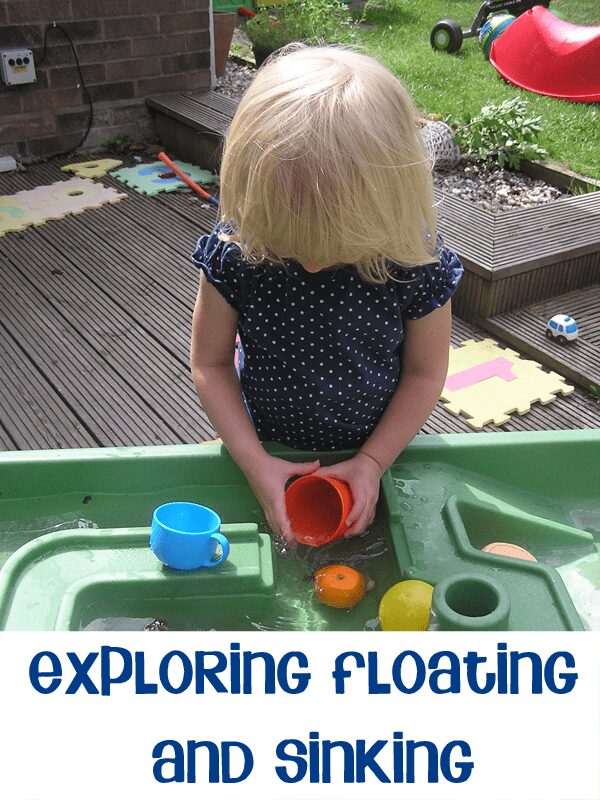 This was such an easy experiment to set up and with 2 children of different ages it was something that I was able to adapt so that both got something out of it. I went around the house collecting a variety of objects – I focused on containers and on balls trying to keep the shapes the same meant that I could discuss some of the properties of what makes things float and sink I also picked up a stick and a stone to use with T (2 and a half) to explain the concepts of float and sink.

Filling up the water table we set about first looking at what is meant by floating and sinking with T – putting (ok more like throwing) the stick into the water table she was a little surprised that it didn’t sink and floated on the surface and then throwing the stone in that the stone sunk looking at the situations with the two we then picked a few flowers, more stones and some more twigs from the garden and tried to predict what would happen with them. 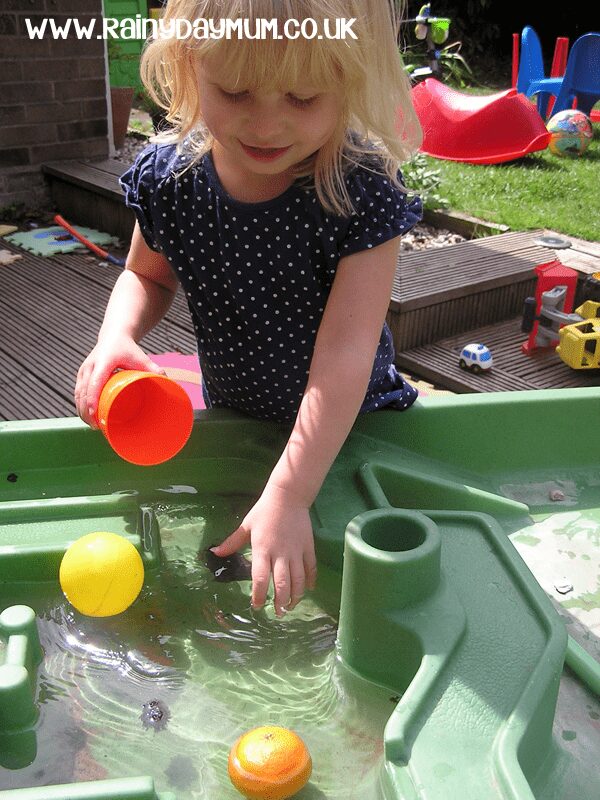 With J (4) we looked at what made things float and sink – using balls first off we had a marble, a ball pitt ball and an orange and a play orange. His first prediction was that all of the balls would float – this coming from his previous experience of throwing the ball pit balls into our pond! So the first ball was the ball pitt ball which as he predicted would float – then he threw the marble in expecting that it would float as well – he was very surprised that it sunk as from his experience everything ball shaped floated.

We then looked at the marble and posed the question – “What is different about the marble to the ball pitt ball?” the first observation was that it was smaller – luckily from T’s collection we had 2 sticks that were different sizes so using those we quickly investigated whether size affects if something floats or sinks. It didn’t sticks of different sizes both floated. 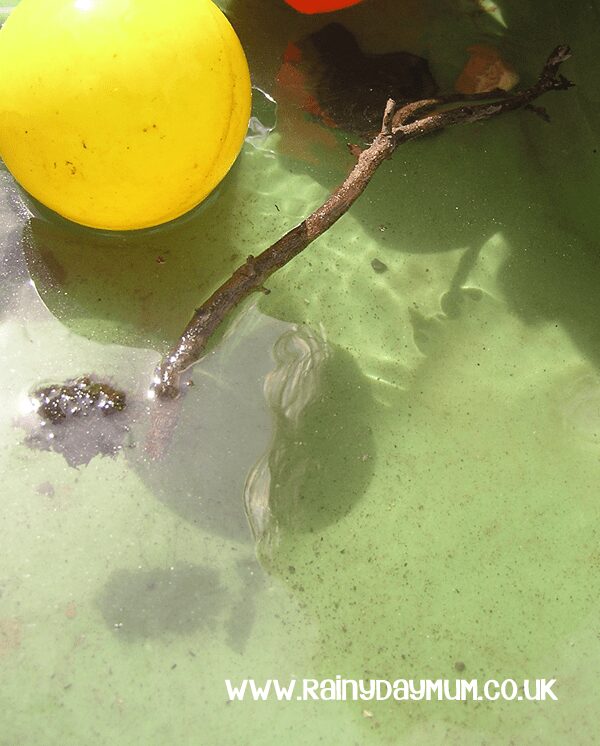 He then pointed out that it was heavier than the ball pitt ball – this is what I was looking for as an answer from a 4 year old if he had been older we would have looked at the word Density and the different materials that it was made of.

We then repeated it looking at containers – again heavier meant that it sank and lighter it floated although not as obvious as with the balls but it was still noticeable. Of course adding containers into the water table meant that it then became less of a science experiment and more of a pouring exercise and keeping cool.

Each month on the Virtual Book Club for Kids an author is chosen and we share an activity based on one of the books – this months author is Donald Crews.

If you have an activity based on one of the books by Donald Crews we would love for you to come and share the activity with us.

Just a couple of points….

A warm welcome to Rainy Day Mum, your hub of ideas and inspiration for kids’ activities, learning, crafts, and tasty treats they can cook themselves. From tot to teen whatever the weather there’s always something fun to do.
457 shares
457 shares