There is nothing like escaping your day to day and discovering somewhere new, and also something very nostalgic if you head off by train. Southeastern Railways covers Kent and East Sussex and is a quick and easy hop to the coast from the city. Hastings is famous because of the Battle of Hasting in 1066, the smugglers that worked the coastline and of course the castle. It’s just two hours south of the city of London and the perfect mini-break or day out as a family. Here are our top tips and finds for discovering Hasting and it's hidden gems by train with the kids. 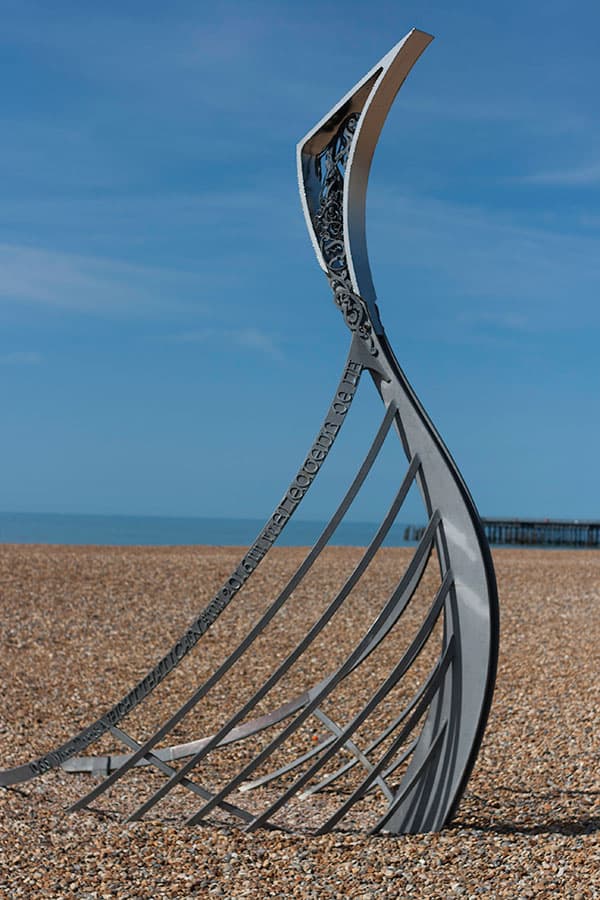 Benefits of Travelling by Train as a family

I love travelling by train, there is something relaxing about it and travelling with kids makes it so much easier than by car. Southeastern Railway has modern carriages with a combination of double seats and also sets with 6 seats and a mini table. That is our pick - we set up "camp" with our collection of activities - top trumps, stickers, reading and colouring books plus a few little snacks for the kids and instead of being stuck in place for the next 2 hours we can move around the carriage, face each other and entertain the kids as well.

Top tip for families: - Pick the carriage with the bathroom it's never fun to try and race from one end of the train to the other with a little one that needs to go

We headed out from London to Hastings on a direct train which was easy with kids as all we had to do was enjoy the journey. Looking out of the window and watching as the city disappeared, we moved to the Kent and East Sussex countryside, spotting cows, sheep and deer along the way, a prize for the first one to spot the sea as we headed down to Hastings. 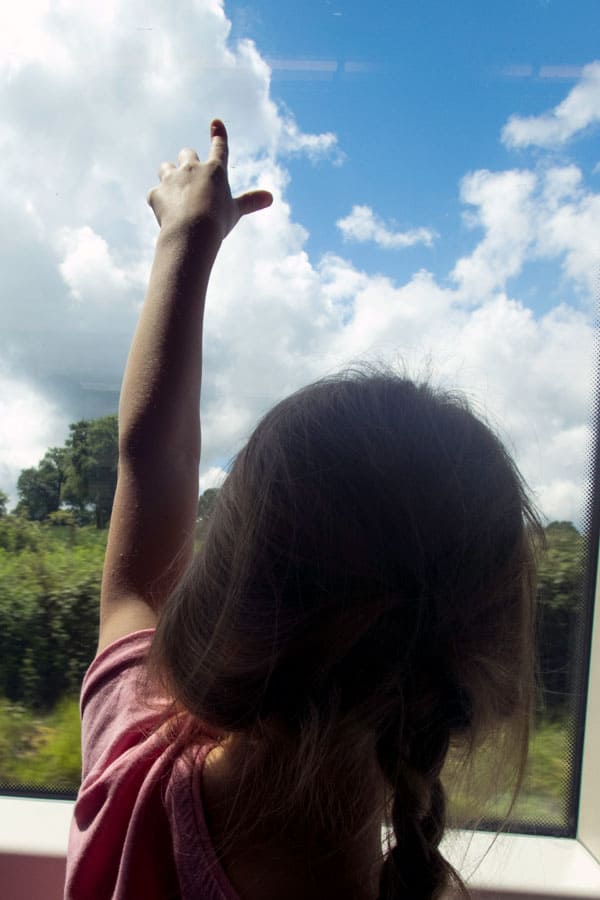 BUT... if you have time hop off the train at Battle - it's worth it especially if you are travelling with children learning about the Normans in History or about to head into year 7 come September as you can walk where the actual Battle of Hastings took place in 1066 country. There is something really mystical about taking a walk in the footsteps of our ancestors and it is well worth it. But it won't make much sense to younger children as it's not like they have the background to appreciate it and they can see some fantastic history that will make them take a step back in Hastings.

Hasting spreads from the East and Old Town, all along the promenade joining seamlessly with St Leonards. The railway station is just a short walk to the sea front and where many of the hotels and bed and breakfasts can be found.

East Cliff dominates the far end of the town with a funicular railway that takes you up the cliff to Hastings Country Park, the best place to take a view of the Old Town whose streets formed the town prior to the 19th Century, Rock-a-Nore the area between East Cliff and West Cliff that houses the Fishermen's Museum and The Blue Reef Aquarium as well as The Stade which for thousands of years has been the launch site of beaching the fishing boats and today has the largest fleet of beach-launched fishing boats in Europe. 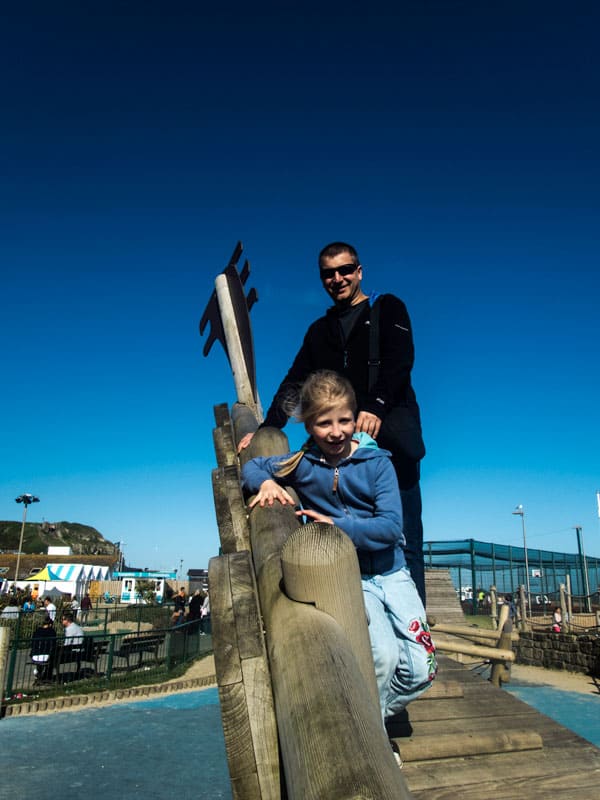 Hastings Old Town is a maze of wonderful streets full of antique shops, little cafes, Italian Gelato shops and some pretty fantastic hidden gems. It is also right at the base of West Cliff which has another funicular railway. This railway takes you up to the top of West Cliff where two of the biggest attractions of the town can be found. The ticket from here is a return and for a family of 4 at the time of writing costs £8 but that ticket was worth the leg pain of our walk up the hill plus we got to experience a little bit of more recent history as the funicular railways were part of the industrial revolution. West Cliff Hill Railway was specifically designed to carry tourists up the cliff to St Clements Caves and Hastings Castle. 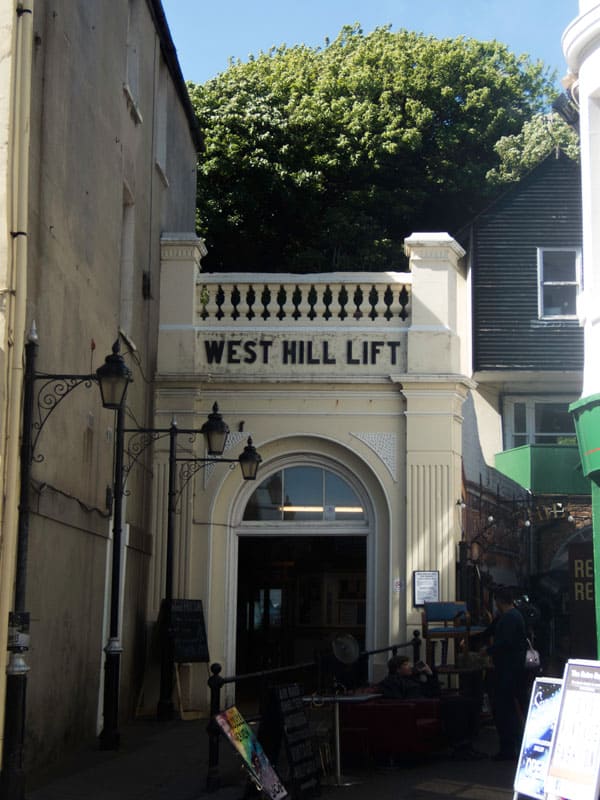 St Clements Caves now renamed Smugglers Adventure is a fun adventure through the caves that wind through West Cliff. A family ticket - 2 adults and 2 children cost £26.30 and you then go on a walking tour through the caves in the hill.

With life-sized characters of some of the more famous smugglers as well as artefacts, it is part museum and part adventure. My daughter (6) found it a little scary despite us having brought a torch but my son (almost 8) didn't and loved it. As parents, we found it fun and if my daughter hadn't been as scared we would have spent more time exploring and learning about these "Land pirates" that used the caves to smuggle in lots of different things to avoid the import tax of their days. 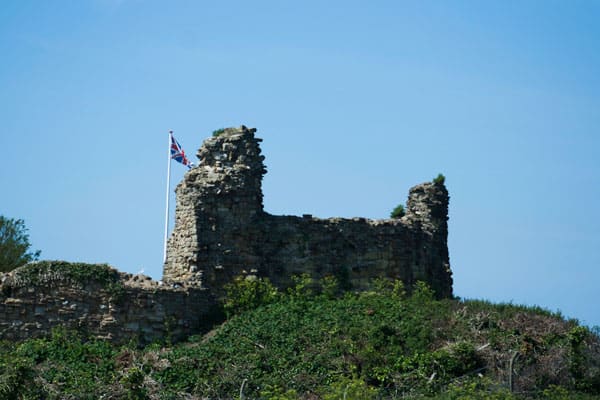 The other attraction of West Cliff is possibly my favourite and is a must see. Hasting Castle - first built in 1066 is thought to be the castle depicted on the Bayeux Tapestry and is the first known Motte and Keep castle in the UK. I remember learning about these castles in school and in particular Hastings Castle as it was the first. My children aren't yet at the age of learning about this, but there is something about castles that they just love. 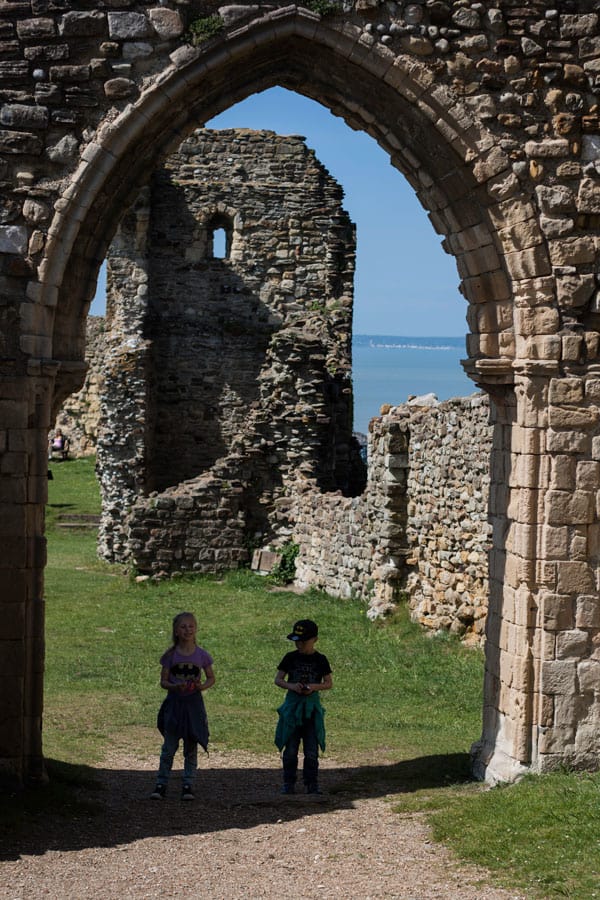 The dungeons are a must see - they aren't nearly as dark as Smugglers Adventure although we did take our torch from Smugglers Adventure to use to explore too. But there was a lot of discussion about how people could have slept in the tiny prisons cages that they would have been put in.

Although in ruins this castle still has some intact features like the Guardrobe that you can walk to through a section of wall (another name for the bathroom), sections of wall that you can walk on and see the defence positions and of course the Motte (big hill) that formed the main part of the original 1066 castle.

If the weather is anything like when we visited then before you head back down the West Cliff Hill Railway take a moment and have an ice-cream from the Cafe at the top and sit outside looking down at The Stade or the Promenade heading towards St Leonards and the Pier. 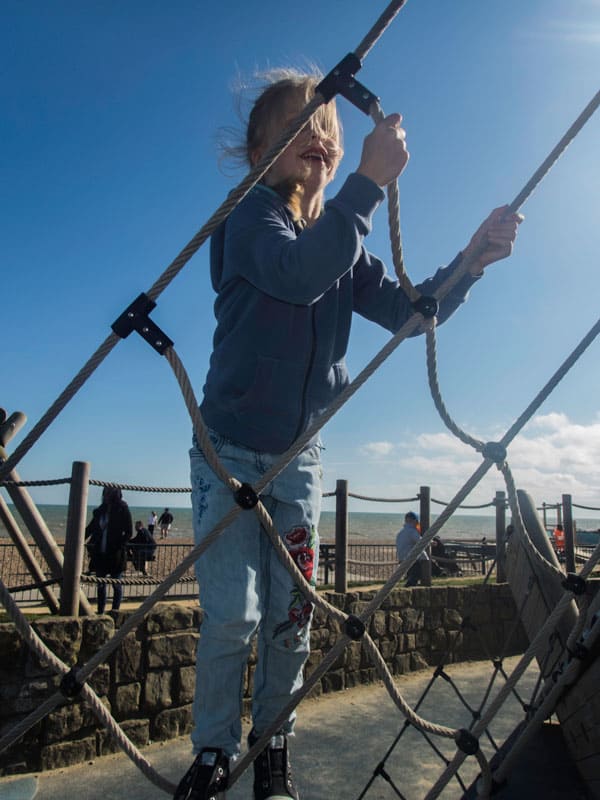 The beach along Hastings Sea Front is mostly pebbles but there are still a number of things to do and see including Hastings Pier which in 2017 is Pier of the Year. No trip to the seaside would be complete without a little time spent in the penny arcades just remember to pack some 1p and 2p's and then try and win. 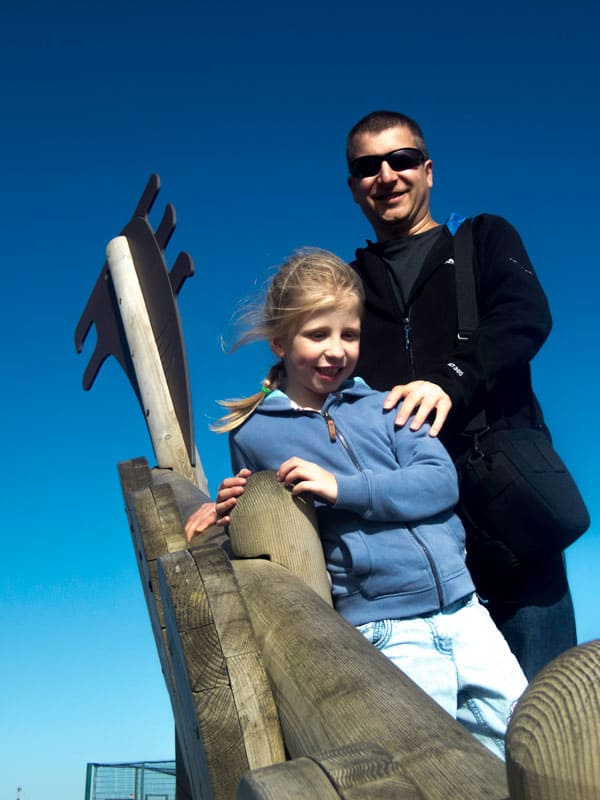 Free activities are even better and in front of the Adventure Golf, you will find a playground for the kids with pirate ship structures to climb and swings. In front of that if you fancy getting a little more active there is a volleyball pitch and basketball court which you can use if it's not scheduled, plus for a small fee some outdoor trampolines. The adventure golf has 3 different courses and if you fancy an ice-cream then the kiosk there serves delicious ice-creams and ice-pops that both the kids and my husband loved. 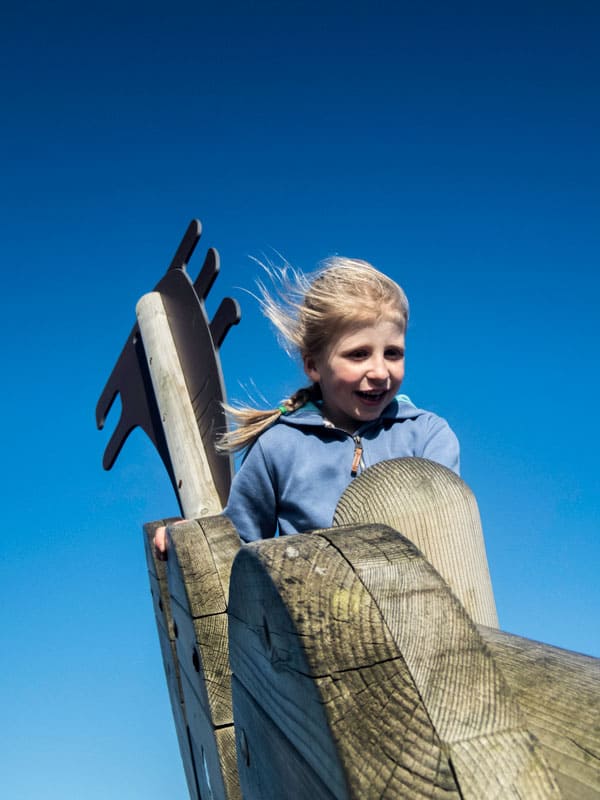 Heading away from the Stade you can't miss a trip out on the pier - the colourful beach huts house craft sellers, food and a bathroom. Hidden behind the cafe is a camera obscura which lets you see pictures of Hastings as you flick through the picture from years ago as well as a yarn bombed seaside photoboard. If you are lucky then you could be there when one of the many events are on like Cinema on the Pier. 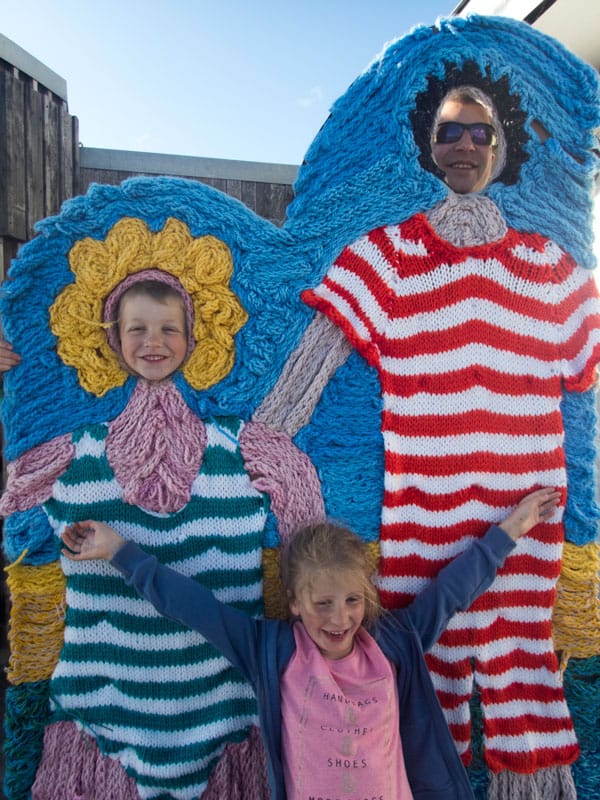 Hastings has so much to offer you just can't do it all in one day, but our hidden gem is along George Street, George Street is the street at the bottom of West Cliff Hill Railway. Full of wonderful little shops it's not till you are at the end that you come to a little gem hidden on the street. 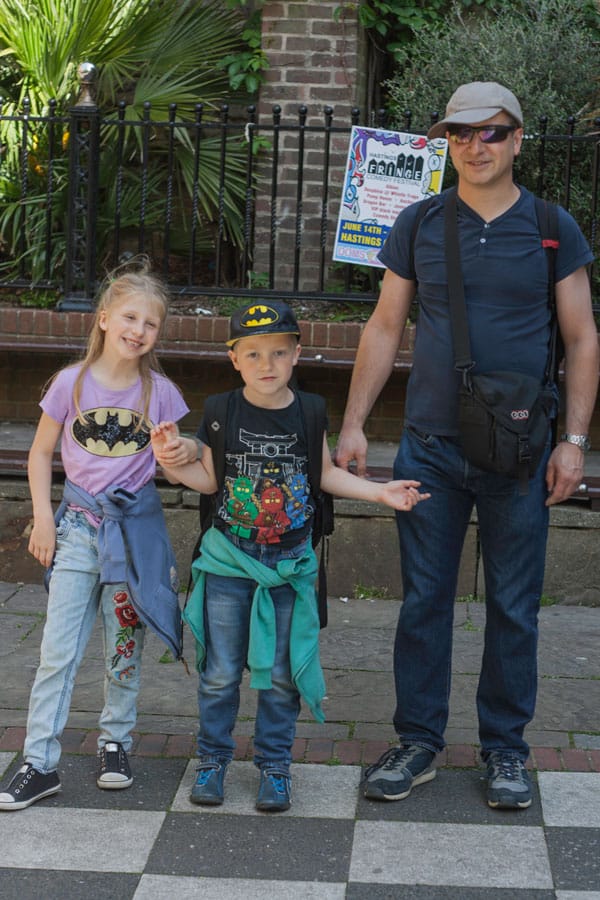 Butlers Gap, a shaded alcove with seating, some fantastic statues and also a chess board on the ground. From the shop down the road - check out the notice on the double door to the side you can rent pieces and spend some time relaxing playing chess in the shade. Of course, this wouldn't be complete without an ice-cream, coffee or even a cold beer from the Old Pumphouse with it's Smugglers Nest just along the street. 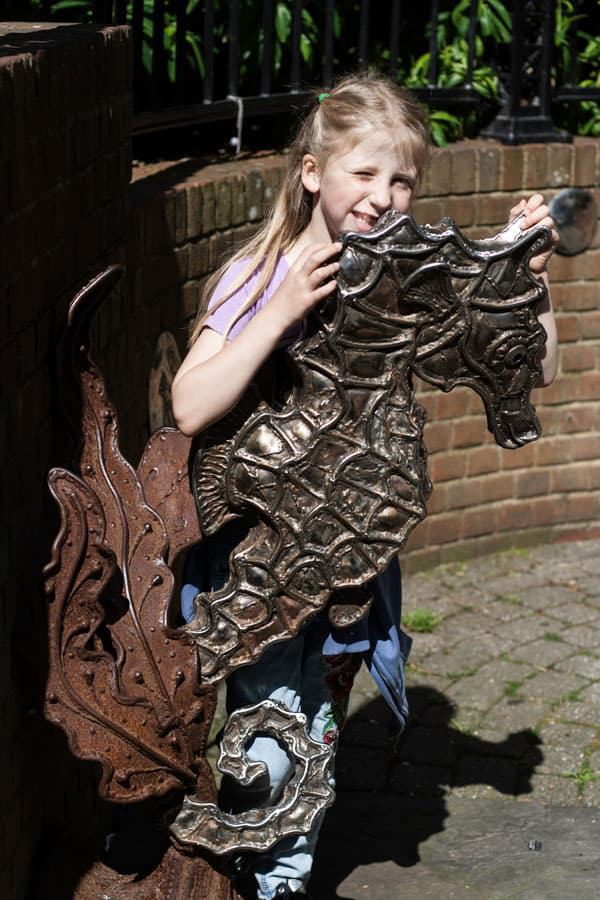 If you fancy booking a day trip to Hastings or somewhere else in East Sussex or Kent, check out the advance purchase offers from Southeastern this Summer starting from as little as £10! Find out more here.

This is a sponsored post on behalf of Southeastern

Pin this Day Trip idea to do later 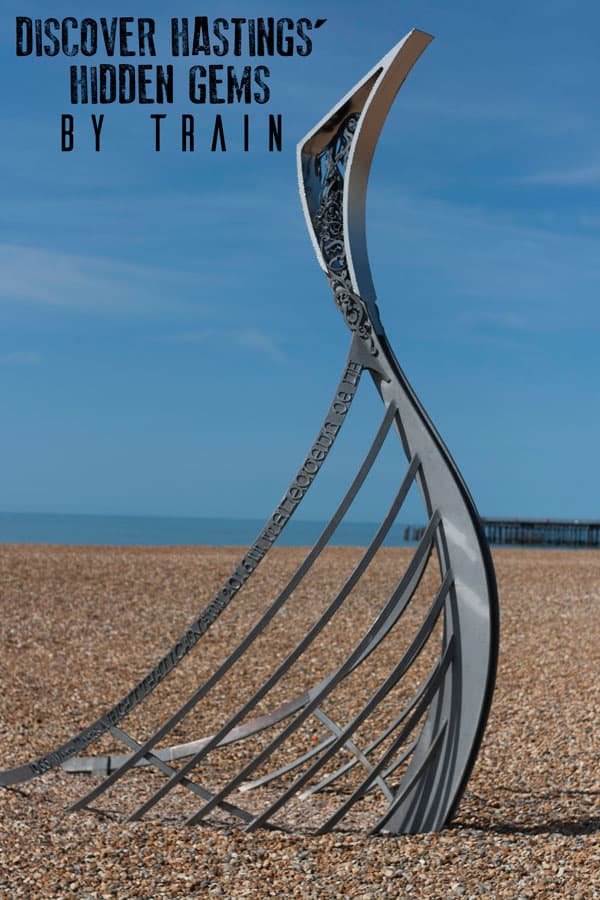 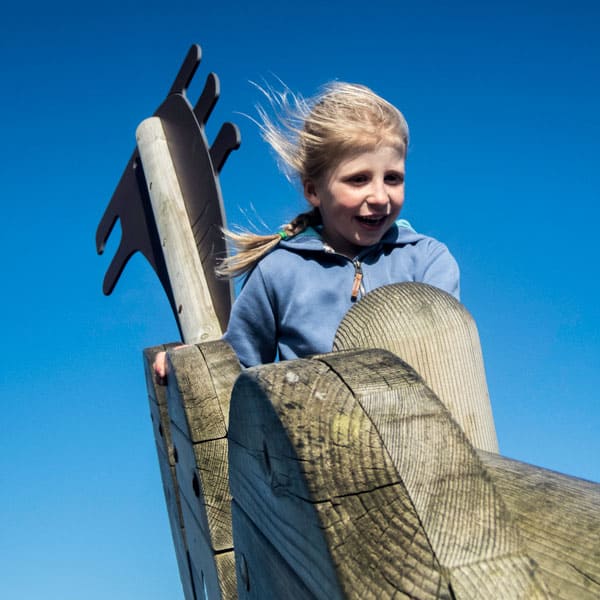