With Spring rapidly approaching we have sunshine and showers which means lots of rainbows to see so inspired by the Confetti Collage post by Picklebum which I featured on our Arts and Crafts for Kids on Tuesday Tots this week we have been hole punching gluing and crafting a Rainbow Picture. 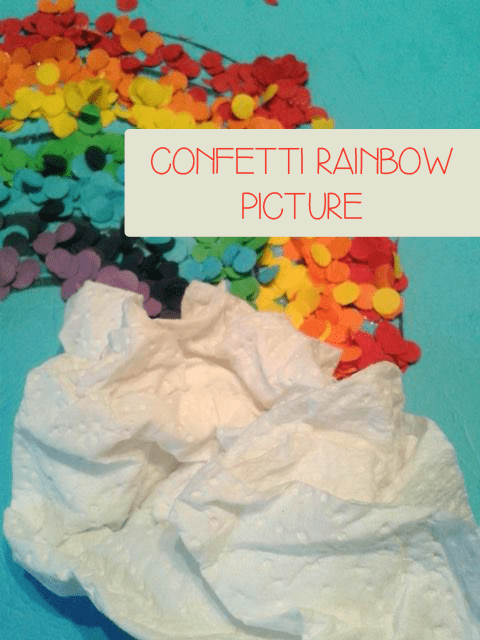 How to make the Confetti Rainbow Picture

I started off by cutting up the sheets of paper into individual strips that would allow the most amount of confetti to be hole punched out of as possible and placed each into one of the cups and set up a Creation Station for T to get busy.

5 SANITY-Saving Play Materials You Can Make at Home

Get these recipes for saving your sanity when you have toddlers and preschoolers.

Save time, money and have fun with your tots

I showed T how to use the hole punch as it’s the first time she had used it and myself and husband helped her punch more out as well (it’s a good idea to check out how easy your hole punch is to use especially when using with preschoolers).

Tackling each colour separately we punched and then placed all of the confetti produced into the cup and stored it away so that it wouldn’t easily tip out (yes we had found out that and I spent ages picking up small circles off the floor.

With all confetti made I drew a rainbow shape on some blue construction card and then T used some glue to fill in the first band of the rainbow and the tipped the red confetti onto the rainbow and moved the confetti into place.

Once the glue was covered she repeated each arc of the rainbow with the next colour.

To create the clouds at the end of the rainbow we took a sheet of kitchen paper screwed it up and then glued it at the bottom of the rainbow.

5 SANITY-SAVING PLAY MATERIALS YOU CAN MAKE AT HOME

Get these recipes for saving your sanity when you have toddlers and preschoolers.

Save time, money and have fun with your tots