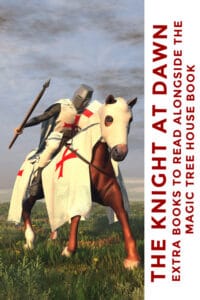 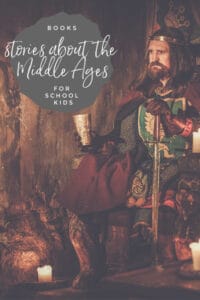 All this year we are reading along with The Magic Tree House series and creating activities, resources and a unit plan to go with the books. The second book in the series is The Knight at Dawn and is set in the middle ages. With each book we’re providing some extra fiction books that your children may enjoy aimed at school kids there is a variety of books here. So here we go our list of Medieval Books for Kids.

The Middle and Dark Ages And Medieval Times

Whilst researching this list one thing stood out. The time scale we were talking about. For us, in the UK, the middle ages and the dark ages are the same. This also corresponds with the Medieval period just to confuse things.

Coming from England and living in an area that was important during this period from around 500AD to 1500AD for the Anglo-Saxons, the Vikings, the Normans and then into the start of the exploration of the world.

With so much happening you can see that there would be a huge list of possible titles so we are focusing solely on those books that feature Medieval knights and castles.

Later in the series, one of the books is about Vikings so we will revisit this time period again.

Best Fiction Books on the Middle Ages For School Kids

Our first 3 books are about some medieval knights. In the Making of a Knight by Patrick O’Brien, we follow the tale of 7-year-old James as he journeys 14 years to through working as a page and squire before becoming a knight like his father.

A classic tale from the Middle Ages and also of the patron saint of England is Saint George and the Dragon the version we have picked is Retold by Margaret Hodges and with the beautiful illustrations, it’s worth considering this as a permanent book on the bookshelf due to crossing this topic plus folk tales and classic tales.

Our next recommendation is The Kitchen Knight again retold by Marget Hodges and this time is from the Tales of King Arthur. Again it is beautifully illustrated and if you love the tales of Arthur and Lancelot this one tells the story of Sir Lancelot.

If you’re wondering what life was like in a Castle then Castle Diary The Journal of Tobia Burgess by Richard Platt is a good book to read. It entertains as well as teaching you about life in a Medieval Castle. Probably more suitable a read for your older school kids than younger ones.

The Minstrel in the Tower by Gloria Skurzynski (a History Stepping Stones book) is set in the period of the crusades and follows two characters of the period as they hunt for their uncle before their father returns from battle.

Marguerite Makes a Book by Bruce Roberston is set at the end of the Medieval Ages in the 1400s. It’s a time when the nobles of the countries want to show their knowledge with illuminated manuscripts. This change and the emphasis on knowledge and art is actually what moves the Middle Ages into the Renaissance era.

Folk Tales and Stories from the Middle Ages

There is a reason that the period of history is sometimes called the dark ages. It’s because not a lot of books and written history was recorded. From the age of the Romans where there was a great deal of knowledge to the Italian Renaissance where it bloomed again.

The dark ages were just that dark and missing in knowledge. However, folk tales and stories were passed down. Through word of mouth, by minstrels and poets. Some of them are worth considering reading to give an idea of what life was like in the Medieval Times.

From the 12th Century, Robin Hood was a real person in England. Likely born in Yorkshire although the tales may be a little tall there is no doubt that he actually existed and written tales of his exploits can be found in books as early as the 17th century written down following the stories told by word of mouth. The Puffin Class The Adventures of Robin Hood by Roger Lancelyn Green is a good read aloud to share with the kids and for older children to read themselves.

Another classic tale is King Arthur and his Knights of the Round Table, featuring tales like the Sword in the Stone and the quest for the holy grail. This is from a similar period to Robin Hood when the Knights from England were fighting the Crusades.

Having read Chaucer for exams in High School it was a relief to find a version aimed at children that told the tales in a way that children could relate to. Chaucer’s Canterbury Tales retold by Marcia Williams giving an idea of how life was in 14th Century England.

Set in Medieval Germany the Pied Piper of Hamelin is a classic tale of a Piper that sets the town of Hamelin free from rats. When the town refuses to pay him, well if you’ve read the story you know if not then it really is a folk tale that you should read.

Adam of the Road by Elizabeth Janet Gray is for older kids but again set in the middle ages around the 13th Century and tells the tale of a boy following his father a wandering minstrel through England.

Although one that I read as part of studies about Anglo-Saxons and Viking Beowulf by Michael Morpurgo is a children’s version of the poem and is set in the Middle Ages. This version, unlike the adult one, is much easier for kids to read and understand.

Fantasy Fiction About Knights and Castles

It’s not all based on facts you can find some great fantasy fiction for kids around the themes of knights and castles.

One of our favourite series of all times is The Chronicles of Narnia and Prince Caspian by CS Lewis would be a great fiction book to read alongside The Knight at Dawn with your kids. This is a stand-alone book although being 4th in the series you don’t have to have read the other 3 beforehand.

Discover our recommendations for book #3 in the series Mummies in the Morning with our list of Ancient Egyptian Fiction Books for School Kids.

A warm welcome to Rainy Day Mum, your hub of ideas and inspiration for kids’ activities, learning, crafts, and tasty treats they can cook themselves. From tot to teen whatever the weather there’s always something fun to do.
16 shares
16 shares