I have seen Spaghetti play all over the internet and pinterest – but apart from when T has dinner I haven’t played with it with her. So I took the challenge and cooked up the spaghetti, because I wanted it to be a visual as well as touch so I used some food colouring. 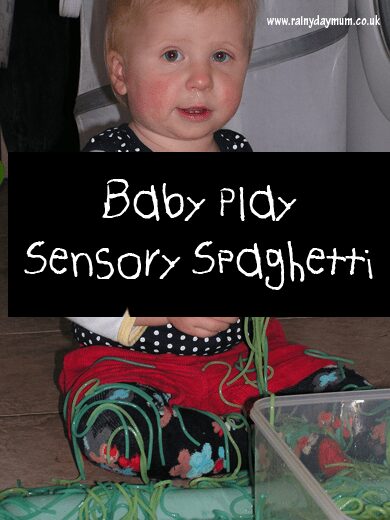 Cooked Spaghetti has a unique feel to it – when J saw what T was playing with he announced it was slimy worms so I cooked up some Spaghetti and the split the quantity in half and dyed half with blue food colouring and a little oil and the other half with green food colouring and a little oil (the reason I have done this is for a few more activities that I have planned that those colours would form a great combination for).

Discover more ideas for Activities aimed at babies and toddlers under 18 months old!

Putting them into a Tupperware container I put this on a tray and on the floor in front of T.

The first thing that T did was get all of the spaghetti out of the box and cover her legs in it (yes she’s a strange baby) she then kept lifting it up and letting it run through her hands.

She played for ages with the spaghetti (it wasn’t allowed to go back in the box though this caused a mini meltdown!) and while she was there she discovered some physics, centrifugal force as she spun it around in front of her face – although she didn’t know that she was doing it of course it was just fun to get it to spin.

Being T though the sensory exploration wasn’t limited to her hands and eyes – she had to taste it. This is the great thing of the spaghetti as a sensory play it’s edible.

A warm welcome to Rainy Day Mum, your hub of ideas and inspiration for kids’ activities, learning, crafts, and tasty treats they can cook themselves. From tot to teen whatever the weather there’s always something fun to do.
465 shares
465 shares