Play dough is an amazing sensory material, it can be colourful, it can be smelly, you can add materials to it, mould it and pretend that it is a variety of different things, but often we forget that it can just be play dough. For babies they have never met play dough before, it is so much fun just in it’s own form. 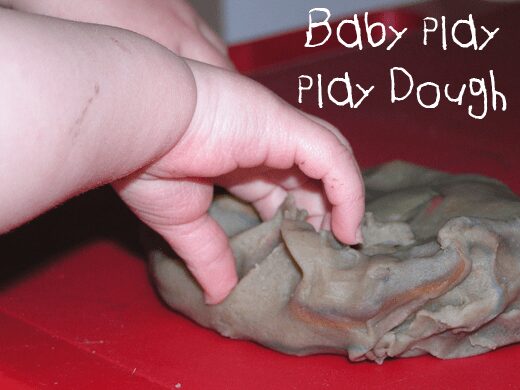 As T is getting less likely to put things in her mouth and I make my own play dough I decided to set up our table with a clump of play dough for her (I use a no cook recipe from The Imagination Tree for all my play dough). I didn’t add anything else to the play dough and in fact the play dough was a lump of mixed up colours that was muddy brown so it was just play dough no added extras.

She has just had her play apron made for her as we were having problems finding one that fitted correctly so when I got it out as J was painting she was very excited as he had had his apron put on and was having great fun so knew that she would as well. When I showed her the table with the play dough on she was so happy and inquisitive as to what it was.

We have lots of different sized rocks in our garden and one of the things that T does like to try is to lift them up so the first thing she did was lift up the play dough – I think she was surprised at how light it was because at first glance it was similar to some of the rocks that she had been trying to lift up.

Once she had lifted it up, it was time for some squeezing and moulding with her hands. This needed a lot of concentration as you can see from her face, she liked squeezing it so that bits popped out between her fingers and then moving it around so that the play dough was back between her hands.

Once she had finished squeezing and moulding it between her hands above the table she then put it down and started to pull on it – she knew that it was moldable but from her exploration she hadn’t realised she could pull it apart. I think when she managed to pull it apart and the squeal of OHHHHHHHHHHHHHHHHHHHHHHHHHHHHHHH that she said was sign of excitement. There isn’t many things that she has the force to pull apart.

Whilst she was playing with it I tried not to show her how to play with it (so difficult when I love playing with play dough as a stress relief) so that she could explore it and find out the properties of it. Whilst she played I talked about how she was “Lifting it”, “it was light”, “Moulding”, “Twisting”, “Turning”, “Pushing”, “Pulling”, “kneading” it was great to introduce some new action words to her vocabulary.

A warm welcome to Rainy Day Mum, your hub of ideas and inspiration for kids’ activities, learning, crafts, and tasty treats they can cook themselves. From tot to teen whatever the weather there’s always something fun to do.
403 shares
403 shares