Want to know something about me! Well even if you don’t I’m going to tell you my husband and I are Star Wars crazy, in fact, we walked back down the aisle 10 years ago this summer to The Throne Room from A New Hope, the first of the original Star Wars Trilogy.

It is something of a passion for my husband, our collection of video’s, DVD’s, Blu-Rays, CD’s, Cassette Tapes, Toys and Books on the theme of Star Wars means that we could probably open our own specialist store. My own collection is tiny and I was a very kind sister that when I grew out playing with the Star Wars characters I had I handed them down to my brother. He and my nephew now play with them over in the USA. 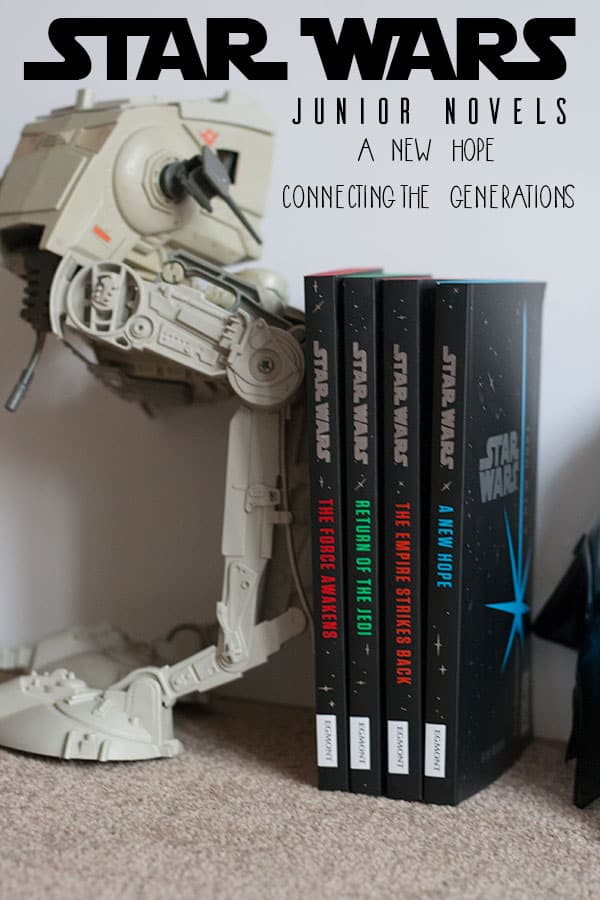 There was only 1 princess that I wanted to be growing up. Those pretty dresses, the princes that would wake me with a kiss and talking to the animals NEVER INTERESTED me. I wanted to fly in a space ship, battle the dark side, wear my hair in buns on the side of my head and have friends like Ewoks and Wookies.

It’s hard to believe that it all started out 40 years ago this year with Star Wars ~ A New Hope, I remember first seeing it on the TV I wasn’t born when it came out and my husband was only 1. However, he remembers seeing it at the theatre before seeing Empire Strikes Back in 1980 when he must have been 4. He and his Dad went and saw them both, they still talk about it now and from that point on he was hooked. It’s still a tradition for them although now they have a little Padawan or 2 with them to join their force. 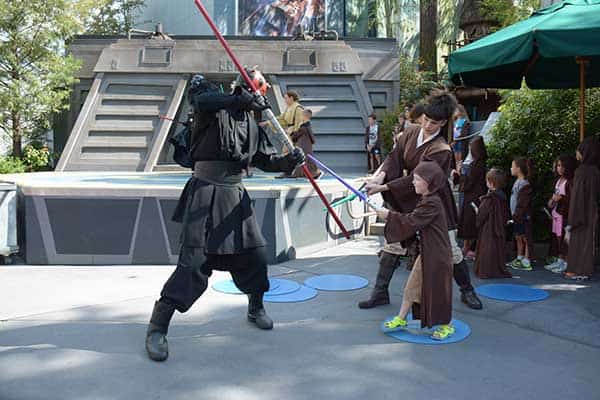 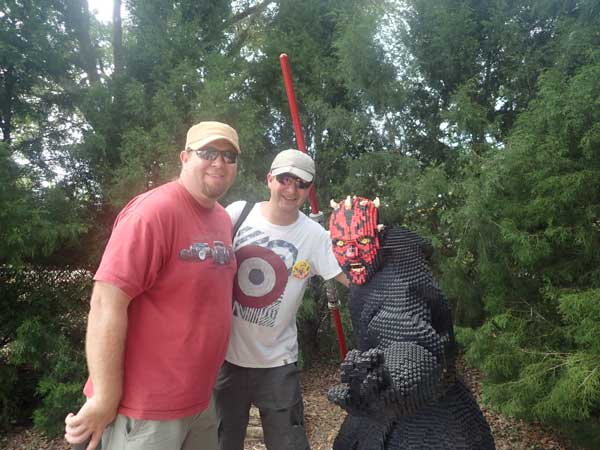 Passing down this love of Star Wars to our children has been something that started out very early in fact just after my 20 week scan with my eldest we headed down to London and the 02 to see Star Wars A Musical Journey – not really a musical more like a huge orchestral journey into Star Wars story and music it was FANTASTIC and the little bean inside LOVED it. He kicked away and turned and tumbled.

Since then it has never stopped – my husband’s much loved Star Wars toys, his original novels and the coffee table books we have collected over the years have been joined by the newer characters, Lego sets and brand new female inspirational character and more. And this month by a set of junior Star Wars novels by Egmont including the 40th Anniversary copy of A New Hope. 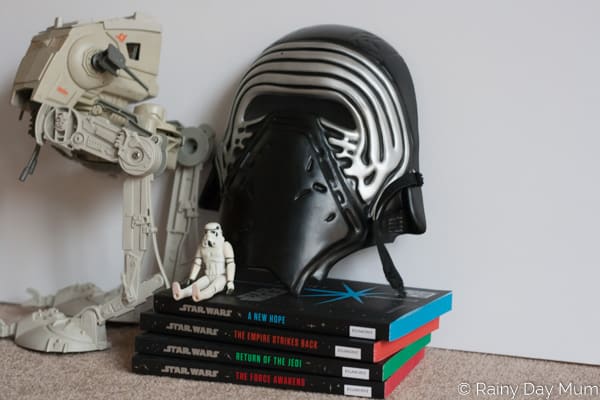 Included in the set are

The perfectionist in me means that although both my son and daughter would love to read and have me read to them The Force Awakens as it’s their favourite it’s a must that you read these in order, the story builds through the books and much like if we were having one of our regular Star Wars movie marathons you just have to do it in the correct order. 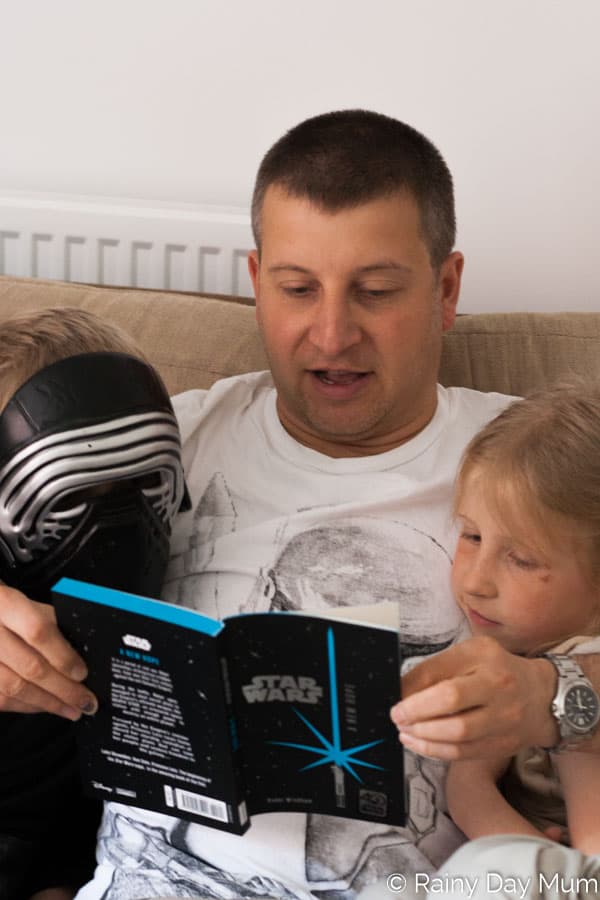 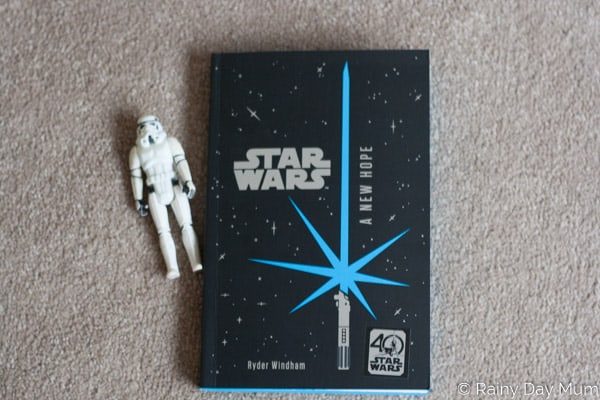 A long time ago in a galaxy far,
far away….

It is a period of civil war.
Rebel spaceships, striking
from a hidden base, have won
their first victory against
the evil Galactic Empire.

Those words introduce you to the novel and from that point on your are transported into the time following the clone wars, connecting with Han Solo, Chewbacca, Princess Leia and Luke Skywalker. This junior novel unlike the novels that we have for adults is written specifically with kids in mind. The story although consistent with the film is adjusted so that it is appropriate for reading aloud. Aimed at 8+ this first book in the series is divided into 15 chapters plus a prologue and epilogue each chapter is long enough to not produce too much of a challenge to those that find reading more challenging and short enough so that you could as a parent say 1 chapter before bed and know that they won’t be up till all hours finishing it.

J who turns 8 in the summer loves the book, he’s a fan of chapter books if they feature adventure stories or humor and this has both. Being a Star Wars fan I was waiting for him to pick out any inaccuracies as he read it but he loved it. Want to take a peek then below you can read 20 pages of the book in the look inside.

The book can be purchased from Amazon.co.uk

Star Wars: The Empire Strikes Back 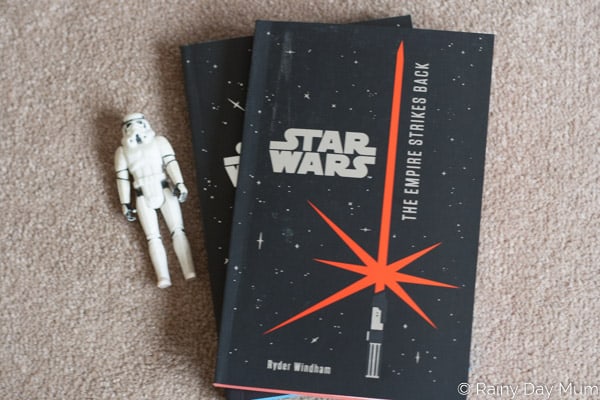 A long time ago in a galaxy far,
far, away….

It is a dark time for
the Rebellion. Although the
Death Star has been destroyed,
Imperial troops have driven the
rebel forces from their hidden
base and pursued them across
the galaxy.

In the second novel adapted for junior readers the story stays true to the film again including the iconic lines “No! I am your father!” which Darth Vadar says to Luke in one of the final scenes and chapters in the book. Again this book is great for readers and a fantastic way to encourage reluctant readers that are Star Wars fans to read longer and more developed books instead of sticking with easy reads.

Featuring all the characters you would expect this book wasn’t our favourite in the series, but then neither is the film, however, compared to some of the other books aimed at this age range it’s a great read that you can really get your teeth into.

This junior novel is available on Amazon.co.uk

Star Wars: Return of the Jedi 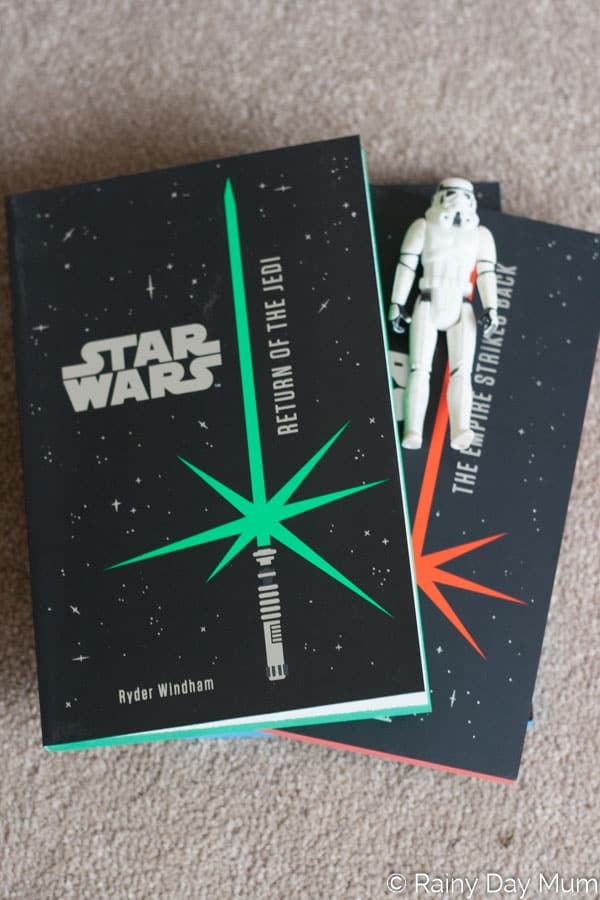 A long time ago in a galaxy far,
far, away….

Luke Skywalker has returned
to his home planet of Tatooine
in an attempt to rescue his friend Han Solo from the
clutches of the vile gangster
Jabba the Hutt.

Of the films and books, this is by far my favourite. I love the characters that you meet including the vile Jabba the Hutt which my brother had a toy growing up. I think the fact that by the time you get to this book the characters are well developed it makes reading it a much more interesting read. As a parent reading together the story so that my youngest can join in I found it interesting to see the difference between how a film is

As a parent reading together the story so that my youngest can join in I found it interesting to see the difference between how a film is adapted for junior readers as opposed to adult readers. Much fewer descriptions are included of the environment instead the focus is on the action and the characters. Having watched the film many many times we were able to talk about the places featured and describe them as we went.

The epilogue is my favourite part and as we read it together I could hear the music playing and picture the Ewoks, Chewbacca, Han Solo, Princess Leia and Luke Skywalker and the way it was translated onto the page kept true to the remake edition but not the original movie *and in my opinion the better ending*!

This book is available on Amazon.co.uk 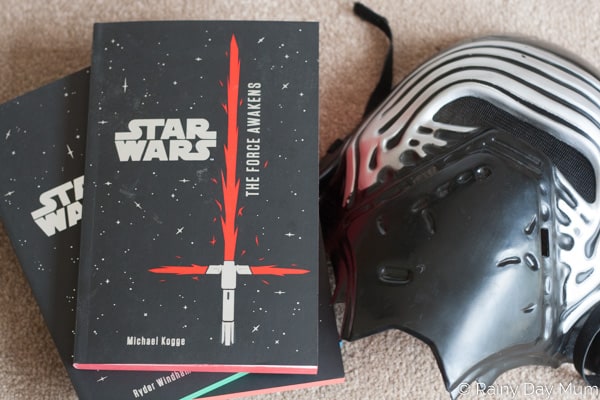 A long time ago in a galaxy far,
far away….

Luke Skywalker has vanished.
In his absence, the sinister
FIRST ORDER has risen from
the ashes of the Empire
and will not rest until
Skywalker, the last Jedi,
has been destroyed.

Of the 4 books, this is the one that my son has been most looking forward to reading. Like his father before him, it was the first film at the cinema that he loved and saw repeated times as he visited with his grandparents as well. Featuring some of the characters from the previous books plus introducing Rey, Finn and Kylo Ren this brings the story to this year’s new movie release and we keep our fingers crossed that that too will be turned into a Junior Novel to join our collection. 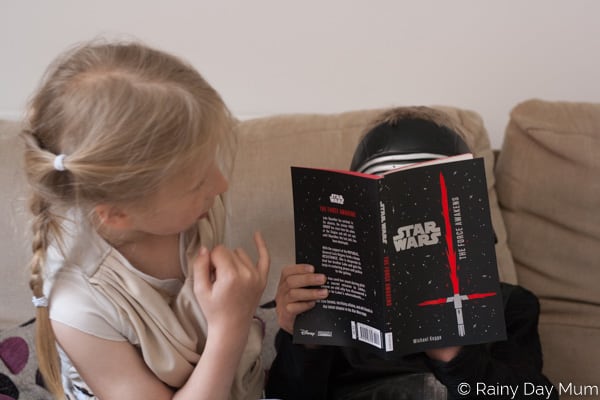 My daughter, not able to read the books independently but loves being read to states this as her favourite as like me the movies and books have inspired her and she now has a female role model in the films that she wants to emulate – Rey. With such a strong female lead who shows courage, determination, and strength it was wonderful to read aloud to her and she sees that all of those are possible and books don’t just have to include pretty fairies, beautiful princesses who need saving. A female can do the saving too. 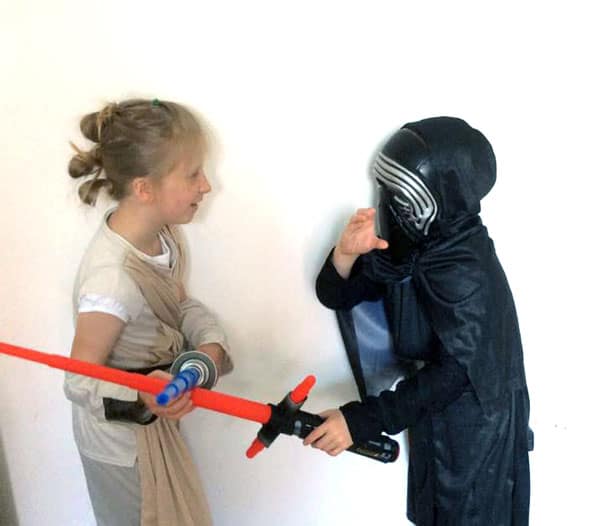 This book is available from Amazon.co.uk

When searching for Christmas Presents for J, my eldest, last year we always try and include a Star Wars themed book and this was it for him. He loves it when friends came around after Christmas showing them the book and talking with them about the different locations of the films. Because like many children of his age the newer films have captured their imagination and if they weren’t already Star Wars fans thanks to their parents they certainly are after watching them.

This book is available from Amazon.co.uk 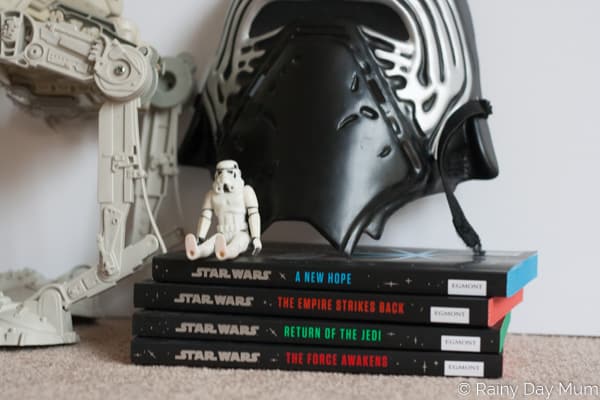 So that you can join in the fun I have a set of Junior Novels to give away to 1 lucky winner from the UK. The books are pictured above (sorry toys not includes as the Storm Tropper and ATST Walker are from my husband originals from the 1980’s and the Kylo Ren mask – my son’s favourite).

To enter you need to visit Egmont Facebook Page just use the entry below.

This is a sponsored post on behalf of Egmont Publishing UK for the Star Wars Junior Novels. 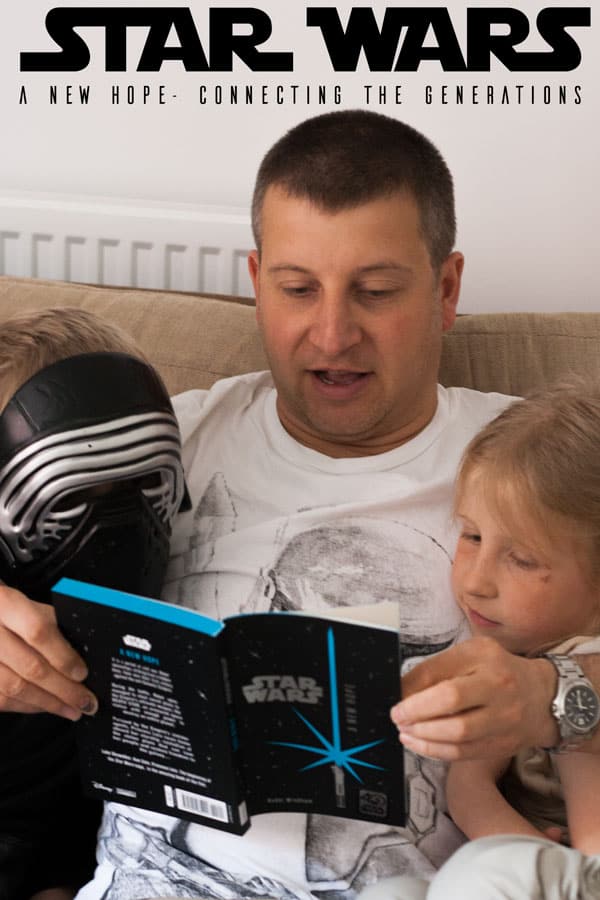 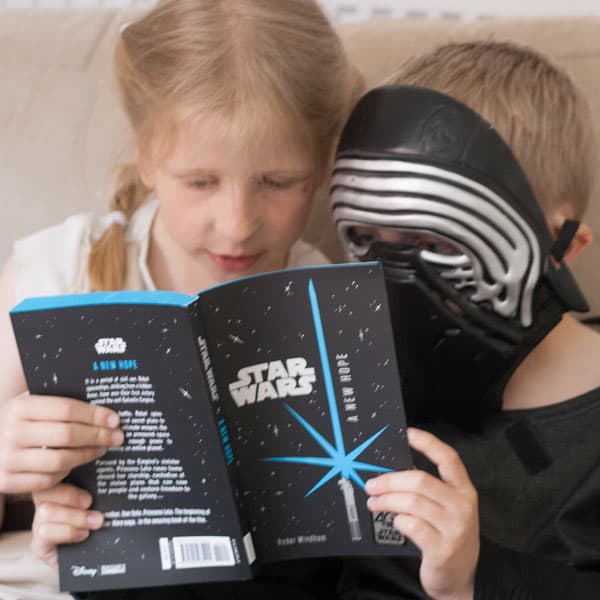 A warm welcome to Rainy Day Mum, your hub of ideas and inspiration for kids’ activities, learning, crafts, and tasty treats they can cook themselves. From tot to teen whatever the weather there’s always something fun to do.
6 shares
6 shares